Make a PBair Booking and Find Some Amazing Deals

Founded in 1990, PBair was a Thai airline which operated scheduled passenger and charter services to domestic destinations within Thailand and international services to other parts of Southeast and East Asia. The airline was based at Suvarnabhumi Airport, Bangkok and flew to several destinations in Thailand, as well as to Vietnam and South Korea.

PBair was originally created by the president of Boon Rawd Brewery, Piya Bhirom Bhakdi, as a way to transport employees of the company. However, by 1997, the airline began operating charter flights. In 1999, after signing an alliance with Thai Airways and Air Andaman, PBair began flying scheduled passenger services.

PBair ran scheduled passenger services for the following 10 years, until in 2009, when the company ran into financial problems and officially stopped operations in December 2009.

At the time it ceased operations, PBair's fleet was made up of two ATR-72-500 aircraft, which were leased from Bangkok Airways. 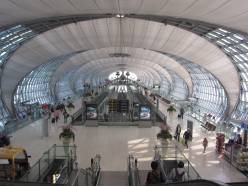