Make a Caribbean Airlines Booking and Find Some Amazing Deals

Caribbean Airlines is the state-owned airline of Trinidad and Tobago. This airline has an extensive route network — flying more than 600 weekly flights to more than 20 destinations in the Caribbean, North America and South America. In addition to the hub at Piarco International Airport in Trinidad and Tobago, the Caribbean carrier also has another hub in Jamaica at Norman Manley International Airport. At present, the airline is the largest airline in all of the Caribbean.

The airline launched flights in 2007, with its first-ever flight taking place on the first day of the year. Soon after, it rolled out the rest of its flight schedule, with 128 weekly departures to 10 destinations and five Boeing 737-800 aircraft. In August 2007, it opened a new 2,000 square-foot sales and ticket office at Nicholas Tower, Independence Square, Port-of-Spain, Trinidad featuring state-of-the-art technology such as internet kiosks for ticket booking and online check-in. Two months later, the airline purchased the remaining shares of the airline, Tobago Express. This acquisition included the airline’s employees, its five aircraft and responsibility for operating the domestic air bridge between Trinidad and Tobago.

In early 2008, Caribbean Airlines began daily services to Caracas, Venezuela. The new daily return flight was the first network expansion since the start of operations in January 2007. The introduction of a daily service to Fort Lauderdale, Florida soon followed and we became the regional-airline with the most direct services between Trinidad and South Florida. This growth was complemented by significant costs savings and increased quality control with the move to insourcing the heavy maintenance of the fleet.

Caribbean Airlines were the pioneers of the simplified one-way fare inclusive of taxes and fees that provided customers with flexible fare combinations and extended stay options. In the first two months of operation, its on-time performance was 93.9%, surpassing the average aviation industry’s standard of 85%. It also exceeded industry standards with an impressive lost baggage rate of just 0.7 for January 2007 (less than one bag lost per thousand passengers).

In the past, to meet increased travel demand for major regional events, like the 2007 Cricket World Cup and the Tobago Jazz Festival in March and April, Caribbean have added extra aircraft and hundreds of extra flights to their schedule. The enhanced schedule also includes special charters to St. Kitts, Bermuda and Grenada, and is a clear example of Caribbean Airlines’ commitment to the travel needs of the people of the Caribbean.

The following is the current route map for Caribbean Airlines, with all the current destinations and routes that they serve.

One piece of carry-on baggage is allowed per passenger. This piece of baggage can't weigh more than 10kg in weight and must be no bigger than the overall dimensions of 114cm. In addition to this, passengers flying on Caribbean Airlines are allowed to bring another small bag, such as a backpack, briefcase, handbag, or laptop. The additional small bag must be no larger than 91cm in overall dimension.

Checked baggage allowance will depend on the fare that is chosen. No one piece of checked baggage can weigh more than 23kg or be larger than 157cm overall.

Passengers flying in Business Class are entitled to three items of free checked baggage, no matter which route they're flying.

Passengers flying in Economy Class with a flex fare ticket are entitled to two items of free checked baggage unless they're flying domestically within Trinidad and Tobago.

Passengers flying in Economy Class with a semi-flex fare ticket are entitled to two items of free checked baggage on routes flying to and from Montego Bay and Fort Lauderdale.

Passengers flying in Economy Class with a semi-flex fare ticket are entitled to one item of free checked baggage when flying any other Caribbean Airlines route.

Passengers flying in Economy Class with a non-flex fare ticket are entitled to two items of free checked baggage when flying to and from Montego Bay and Fort Lauderdale.

Passengers flying in Economy Class with a non-flex fare ticket are entitled to one item of free checked baggage on all other routes.

Passengers can use web check-in by visiting our online check-in page and clicking on the Caribbean Airlines logo. Once redirected to the airline’s own check-in page, click on the check-in tab and enter the relevant flight details. Online check-in is available on between 24—3 hours before departure time.

Alternatively, passengers can check-in for their flight at the airport by visiting the Caribbean Airlines check-in counters. Check-in counters close one hour before scheduled flight departure time. Please arrive in good time to allow for check-in, baggage drop and security.

The great onboard atmosphere extends to Economy Class. Flight attendants are dedicated to looking after you, giving you a friendly welcome and sincere hospitality. It’s all part of being Caribbean and part of all the Caribbean Airlines experience.

Enjoy a warm meal onboard and satisfy your thirst with a wide selection of complimentary non-alcoholic drinks. You can catch up on your favourite TV shows and recent movies by streaming above the clouds. Stay connected with friends and family with Wi-Fi connectivity onboard.

Caribbean Plus is the equivalent of Premium Economy, which provides passengers with a little more comfort than economy class. Passengers receive earlier boarding, extra legroom seating, extra room to recline and exit quicker on arrival at your destination.

Business Class seats are set out in a 2 x 2 for 2 x 2 x 2 formation and give ultimate room and comfort for a totally relaxed flight.

There are three tiers to the program:

There's an exciting range of classic sitcoms, kids shows, travel documentaries and much more available to stream with the Caribbean View app.

With the Carribean View app, passengers can enjoy new releases, comedies, cartoons and so much more. There's something for every age and every taste with Caribbean Airlines.

The airline offers food and drinks on all flights. The Caribbean Airlines in-flight menu is inspired by a mix of tastes Caribbean islands and Western cuisine.

All food and drink is complimentary in the airline's Business Class cabin, while free soft-drinks are offered to passengers who are flying in Economy or Premium Economy.

Piarco International Airport is one of two international airports serving Trinidad and Tobago and is Caribbean Airline’s hub. It is the seventh busiest airline in the Caribbean in terms of passengers served. 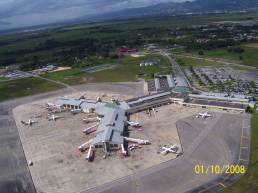 Please click on the logos below to find out more about airlines that fly similar routes to Caribbean Airlines:

Pay with a Payment Plan

Pay Caribbean Airlines tickets over time with Affirm, PayPal Credit or Klarna. Buying flights on finance is easy to set up and convenient, giving you an affordable way to purchase flights by allowing you to pay back the cost of your flight over time.