Avior Airlines is a Venezuelan airline that flies scheduled and charter passenger flights. It also has a subsidiary airline called Avior Airlines Peru, which mainly flies to destinations within Peru. The airline is based at Generál José Antonio Anzoátegui International Airport, Barcelona and flies to destinations within South America and the Caribbean.

The airline launched in 1994 and operated its first-ever service between Canaima and Margarita Island with a charter flight. It began flying scheduled flights shortly after and has now built its route network to include more than 10 destinations.

To learn more about domestic services within Venezuela please visit our 'Domestic Flights in Venezuela' page.

The airline has historically used regional jets from manufacturers such as Cessna and Dornier. However, in recent years, it has updated its fleet and taken on narrow body Boeing aircraft and wide body Airbus aircraft, which are used for its long-haul flights. World Atlantic Airlines has previously leased aircraft to Avior.

Flights with Avior Airlines can be booked in English with Alternative Airlines. Just search for the routes you want to fly, fill in your details and your e-ticket will be emailed to you all in English. 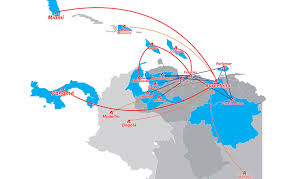 Onboard the Airbus A340-300, there are 219 seats in economy class. These have the typical economy set up of a 2-4-2 configuration and the seats themselves are very comfortable and provide for a good flight experience. Boeing aircraft offer a similarly comfortable cabin experience, however, seas are set out in a 3 x 3 formation.

Business Class is only operated on Avior’s transatlantic flight on the Airbus A340-300. In this class of 28 total seats, there is a configuration of 2-2-2. The seats are angled flat to be able to relax properly. This service also gives passengers a greater baggage allowance.

Passengers are offered a selection of food and drink from the airline's in-flight menu. The menu will differ depending on the route flown, with snacks served on shorter-flights and meals served on select longer flights. Soft drinks and water are offered on all flights.

Avior Plus is Avior Airlines exclusive frequent flyer program that rewards passengers by allowing them to accumulate air miles each time that they fly. These miles can then be spent to upgrade or purchase future flights on Avior Airlines.

Avior Airlines isn't part of an airline alliance at this time.

Avior Airlines is based at General Jose Antonio Anzoategui airport in Barcelona, Venezuela. The airport has a single terminal building and two separate runways. The airport mainly facilitates domestic flights but does have international services from Avior Airlines.

Avior Airlines is currently the only airline that uses the airport as a hub. However, Conviasa, LASER and Rutaca Airlines all fly to/from the airport too.

Please click on the logos below to find out more about airlines that fly similar routes to Avior Airlines: