Make a Mandarin Airlines Booking and Find Some Amazing Deals

Mandarin Airlines is a Taiwanese airline based in Taipei, Republic of China.

Mandarin Airlines is majority owned by it's parent company China Airlines which is currently part of the SkyTeam alliance making Mandarin Airlines a SkyTeam affiliate. SkyTeam was the last of three major airlines alliances to be formed, however over recent years has grown to become the second largest airline alliance.

International Routes: 30kg for economy, 35kg for premium economy and 40kg for business class. Each individual bag must be below 32kg in weight.

Passengers travelling domestically can check in online between 24 hours and 1 hour before take-off. This can be done on the Mandarin Airlines website.

Passengers on international flights can check-in online between 24 hours and 1.5 hours before take-off

Please note that when checking in online, passengers cannot obtain a boarding pass. Instead, passengers must collect this at the airport at least 20 minutes before take off for domestic flights, or 1 hour before for international flights.

Passengers travelling on domestic routes must check in at the airport at least 1 hour before scheduled departure time.

Passengers travelling on international routes can check in at the airport from 2-2.5 hours before take-off.

The airline only offers Economy Class.

As of January 2022, Mandarin Airlines' fleet consists entirely of ATR 72-600 aircraft. It has 9 in service that can each seat up to 70 passengers. It's the ideal aircraft for regional airlines like Mandarin Airlines.

Taipei Songshan Airport is an airport serving Taipei, China and is the hub airport for Mandarin Airlines. It is also the focus city for China Airlines and EVA Air.

The airport has one runway and can handle nearly 10 million passengers every year. Airlines which fly to and from Taipei Songshan Airport include Air China, All Nippon Airways, China Airlines, China Eastern Airlines, EVA Air, Japan Airlines, Mandarin Airlines, Shanghai Airlines, Sichuan Airlines and many others. 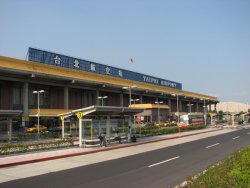 Dynasty Flyer offers frequent flyers lounge access along with many other perks. With Dynasty Flyer, you can earn miles when flying with Mandarin Airlines as well as with car rentals and hotel stays offered by China Airlines. You'll also get award tickets, upgrade awards and boutique redemption.

Please click on the logos below to find out more about airlines that fly similar routes to Mandarin Airlines: