CM Airlines, also known as Cielo Maya, is a domestic airline based in Honduras, founded in August 2008. CM Airlines flies out from Toncontín International Airport (TGU) and travels to San Salvador, Guatemala City, Tegucigalpa, San Pedro, Roatan, Puerto Lempira, Utila Bay Island and Copan Ruins. The airline has a Saab 340, Embraer EMB 110 and Let 410 in its fleet which is outfitted with the latest technology in air navigation, satellite systems and GPS. The pilots are recognized at an international level, which enables the airlines to ensure that the flights will be safe and the passenger will have excellent flying experience. CM Airlines has created a more modern image in association with the development of aviation tourism for Honduras and Central America. CM Airlines' fleet includes LET L-410 Turbolet, Embraer EMB 110 Bandeirante and SAAB 340.

CM Airlines allows passengers to bring one item of hand luggage, weighing a maximum of 5 kg. In addition, passengers are permitted one personal item, which must not exceed 45 x 38 x 20 cm.

CM Airlines offer passengers online check-in from 24 hours before departure, until 1 hour before. More information can be found on their website, here.

Imagine how easy your life would be if you could book flights from all over the world in English? Well, now you can. With Alternative Airlines you can book CM Airlines flights completely in English. We also have an excellent English-speaking customer service team who are ready to answer any of your queries.

Economy Class is the only cabin class that CM Airlines offer.

Due to its small domestic route network, the airline doesn't offer many facilities. This includes no food and drink, WiFi or in-flight entertainment. However, you can stay entertained with magazine and newspaper that they give out to their passengers.

However, the airline's cabin crew are trained to the highest of levels to make sure you safely and comfortably arrive at your destination.

Seats are set out in a 3 x 3 formation. Economy Class seats are comfortable with sufficient legroom to give passengers a pleasant and relaxed journey.

Please click on the logos below to find out more about airlines that fly similar routes to CM Airlines:

What sets StarMiles apart from the rest is the flexibility to be able to have a single account used by an individual, family, or business. The colours of CM Airlines fleet are striking gold and forest green and the logo of the Esmeralda hummingbird represents a native bird to Honduras. This hummingbird does not appear in any other part of the world and is registered only in dry valleys in Atlantic Honduras. Visit the Alternative Airlines blog for a breakdown of the best frequent flyer programs around the world.

As of January 2020, CM airlines fleet consisted of 19 and 33 passenger aircraft, including: 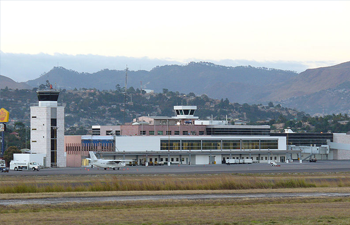 CM Airlines is not part of any airline alliance however they are in alliance with Transportes Aéreos Guatemaltecos and this has allowed us to join the international level, specifically the daily flights of the routes of Guatemala City.

Due to the holiday change, CM airlines have altered their schedule to fit in with religious ceremonies. The schedule is as follows:

CM Airlines have announced they will commence flights between Cholteca and Tegucigalpa, 5 x Weekly with Let 410 aircraft. The airfield recently completed runway works to extend its length to 1,600 metres so as to permit 50-70 seater aircraft to land and take-off. It will also serve to boost the export and import of agricultural products through the use of the large cargo aircraft.

Added 10 flights a week to Guatemala

2 extra flights a day to Roatan

New aircrafts were added to total 14 aircrafts and a team of 40 people.

Launch of our new website and social media network, September 2011.

The airline had 5 routes, 4 aircraft and a team of 22 people.

Flights between Puerto Lempira and Tegucigalpa every Monday, Wednesday & Friday

The airline had 34 flights per week, three aircrafts and a team of 15 people

The airline had three routes, two aircrafts and a team of 10 people.

The airline had one route, four flights a week, one aircraft and a team of just 5 people.