Make a Silver Airways Booking and Find Some Amazing Deals

Silver Airways is a American airline which is headquartered in Fort Lauderdale in Florida and operates flights domestically within America and in the Bahamas. 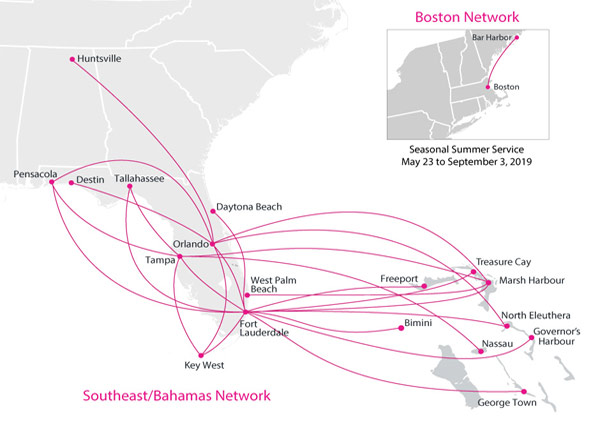 Fort Lauderdale International Airport is the main airport serving Florida and is the hub airport for Spirit Airlines and Silver Airways. Other airlines which fly to and from this airport include Air Canada, American Airlines, Copa Airlines, Delta Air Lines, Frontier Airlines, Allegiant and Alaska Airlines.

From July 2018, Silver Airways will launch a new service from Boston, where the airline plans to operate Boston – Bar Harbor service. On board Saab 340 aircraft, the airline will offer 2 daily flights from the beginning of the month. The new Silver Airways schedules will be as follows:

Florida’s First Airline, is continuing its expansion by announcing that it will start daily non-stop service to Missouri’s Branson Airport (BKG) from New Orleans International Airport (MSY), Houston’s Intercontinental Airport (IAH), and Chicago’s O'Hare International Airport (ORD) on August 30, 2018. The CFO of Silver Airways is very happy to announce theese new routes as part of the airline's growth. The Branson routes will be operated with Silver’s brand new fleet of eco-friendly ATR-600 aircraft.

Silver plans to take delivery of up to four of the new ATRs in the fourth quarter of 2017, following regulatory approvals. Delivery of the remaining 16 aircraft should be completed by first-quarter 2020, the company said. The new aircraft will gradually replace Silver’s existing fleet of 21 34-seat Saab 340B Plus turboprops “over time,” the company said.

Silver said it has entered into negotiations with San Juan, Puerto Rico-based Seaborne Airlines to explore commercial cooperation and a potential “combination.” Seaborne provides connections throughout the Caribbean via its San Juan hub; the company is majority-owned by Philadelphia-based investment firm Versa Capital.

Silver also announced the appointment of new CEO Steven Rossum, effective Aug. 8. He succeeds Sami Teittinen, who is leaving the company for personal reasons. Rossum has been serving as Silver’s external general counsel and fleet transactions advisor and has had an extensive career in aviation legal and financial management at Pinnacle Airlines, Air Tran Airways, DHL Airways, among other airlines. Additionally, Silver also promoted EVP-commercial and CFO Jason Bewley to president and CFO of the company.

“The momentum of our airline, as demonstrated by the order for new ATR-600 series aircraft [and] the potential for Caribbean expansion … were the key reasons I decided to join Silver,” Rossum said. “[We] are fully focused on safety, reliability, growth and working toward fulfilling Silver’s promising future.”

“This aircraft acquisition is a monumental leap forward for Silver … and will allow us to expand our network with greater reach, including further into the Caribbean and the southeastern US,” Bewley said.