Make an Air Corsica Booking and Find Some Amazing Deals

Air Corsica operates passsenger services from Corsica to continental France with hubs at Figari Sud-Corse Airport, Bastia Poretta Airport and Calvi Airport. The airline was established as Compagnie Corse Mediterranne in 1989 and changed its name to CCM Airlines in November and then finally to Air Corsica in 2010.

Air Corsica has developed a strong partnership with Air France and operates certain flights as a franchise (and codeshares) for Air France, Alitalia and HOP!.

Online check-in for Air Corsica is available from 30 hours prior to flight departure and closes 30 minutes prior. Passengers can check in from their mobiles by downloading the Air Corsica mobile app.

Passengers can check in at the airport by presenting their identity documents and baggage to receive their boarding cards.

Alternative Airlines customer are now able to book additional baggage at the time of reserving their Air Corsica flight.

Air Corsica allows passengers to carry a maximum of 8kg of carry-on baggage on its ATR aircraft and a maximum of 12kg on Airbus flights.

The maximum baggage allowance for Air Corsica flights is 23kg per passenger.

What’s different about Corsica compared to many other airlines, is that most on-board services are included in the price of a (standard economy) ticket. This includes:

Corisca’s premium fare is called Comfort. It offers extra baggage allowance: you are entitled to 2 cheked-in bags of 23 kg each.

Air Corsica is based at Ajaccio Napoleon Bonaparte Airport which is the main airport that serves Ajaccio on the French Island of Corsica. Other airlines which operate out of the airport include Air France, HOP!, Norwegian and Volotea. 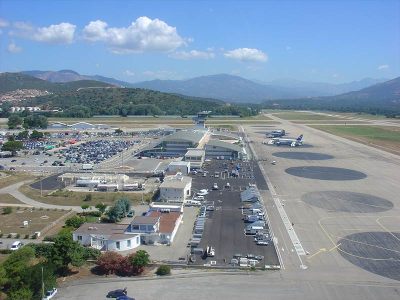 Please click on the logos below to find out more about airlines that fly similar routes to Air Corsica: