Make an APG Airlines Booking and Find Some Amazing Deals

APG Airlines is a French airline based in Toulouse, France and operates charter and scheduled passenger flights. The airline was founded in September 2015 and currently only operates one route, between Toulouse Blagnac Airport and Lorient, which it flies on to and from five-times weekly basis.

APG Airlines is owned by the APG Group, which specializes in interline e-ticketing solutions, fare filing, BSP support services as well as other airline distribution solutions. Overall, APG Group has more than 200 associate airlines, which are available to book on the APG platform on many different worldwide travel agencies, using APG Airlines GP IATA code.

APG Airlines was founded in 2015, originally flying bi-weekly between Milan Bergamo and Nice. However, after three years, the airline stopped operating the route and launched flights between Toulouse and Lorient instead.

APG Airlines uses a fleet of Beech King Air 350. The airline has two of these aircraft type within its fleet.

Checked baggage must be within 158 cm (62") when combining the height, width and length dimensions. The baggage must weigh 20 kg (44 lbs) or less.

What facilities are available?

APG Airlines operates a small aircraft with only one cabin class. While this cabin isn't officially 'Economy', it's the only cabin class offered and is a fairly simple service. There's a shared screen which shows live progress of the flight and a shared table per two persons.

Seats are set out in a 2 x 2 formation and give a lot more legroom when compared to larger aircraft. Seats are cushioned and comfortable.

There are no in-flight entertainment system onboard APG Airlines flights. However, the airline does have a screen in its cabin that show live tracking of the flight.

There currently isn't any information on the airline's in-flight meals at this time.

APG Airlines doesn't partake in an airline alliance at this time.

There currently isn't any information on the airline's special services at this time.

Toulouse–Blagnac Airport (TLS) is an international airport in Toulouse, France and is the hub airport for APG Airlines. It's located just outside of Toulouse and facilitates flights travelling across Europe and Northern Africa. The airport has two runways and one terminal building.

APG Airlines is the only airport that uses the airport as a primary hub. However, easyJet, HOP!, Ryanair, Swiftair, TUI Belgium, Twin Jet and Volotea all use the airport as a secondary hub. 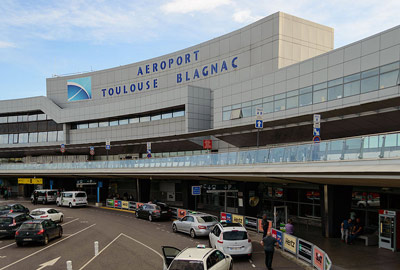 Please click on the logos below to find out more about airlines that fly similar routes to APG Airlines: