Make a Cape Air Booking and Find Some Amazing Deals

Cape Air was founded in 1988, originally flying between Provincetown and Boston in Massachusettes, however, the airline gradually added new routes to destinations across southeastern New England. In 1994, Cape Air merged with Nantucket Airlines and has been able to& offer hourly services between Nantucket and Hyannis since.

In 2007, the airline commenced an expansion of services in the Northeast and Midwest and soon after began services between Boston and Rutland, Vermony, flying 3 x daily. In 2016, it expanded its routed network and started flying from Fort Lauderdale, Florida to Bimini, Bahamas.

Economy Class offers an efficient and relaxed service to get you to your destination.

As the services are short, there's no in-flight food, drink or entertainment.

Currently, Cape Air only operates one type of class service on its flights; Economy Class. Passengers can expect a comfortable flying experience. Onboard the Cessna 402C, the seats are arranged in a 1-1 formation, with 27inches for each seat pitch. Seats also have a standard width of 17 inches, but due to the size of the plane, there is currently no seat recline. 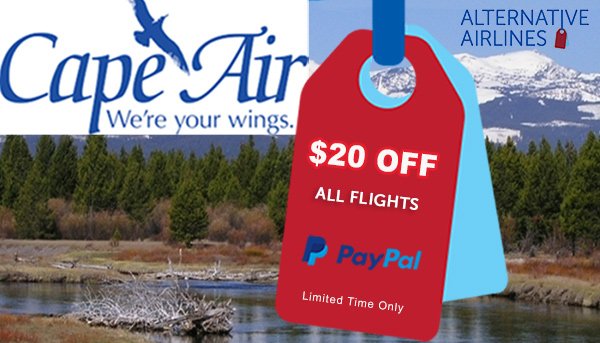 You can get $20 off any Cape Air flights and many other airlines with this coupon deal. Just use the Promo code PAYPALUS2019 when paying with PayPal.

Terms and Conditions of the coupon deal: It can only be used in USD and only with PayPal. Airfares and prices are subject to availability. Only one voucher use allowed per customer. Over 18s only and non-refundable. Cannot be combined with any other promotion. For full T&C’s visit our  Terms and Conditions Page