Make a LATAM Airlines Booking and Find Some Amazing Deals

LATAM Airlines is a South American airline group under the Brazilian and Chilean law and headquartered in Santiago, São Paulo, Brazil and Chile.

LATAM Airlines flies from many European countries to a wide range of Latin America destinations, which include: Chile, Argentina, Perú, Brazil and Colombia. LATAM airlines is a leading carrier of air travel, and has recently joined ONEWORLD alliance program. With a fleet of 172 aircraft LATAM is operating 800 departures daily. The airline provides domestic and international routes for worldwide customers with scheduled services to destinations within Brazil, as well as international flights to Europe and other parts of North and South America. Also customers can benefit from remote medical assistance on international flights, LATAM Loyalty Program, Fidelidade, and LATAM Cargo services.

In 2011 Chile’s LAN Airlines and Brazil’s TAM Airlines signed an agreement to merge and acquired LAN Colombia (formerly Aires). In 2015 LATAM Airlines announced that it would fully rebrand to LATAM, with one unified livery on all aircraft by 2018. The first one was introduced in 2016. The rebranding process is currently taking place and completion is expected by 2019.

The maximum permitted weight and dimensions for one checked bag for passengers travelling with LATAM Airlines is 23kg (50 lb) weight and 158 linear (total of width, thickeness and height dimensions)cm (62 linear in). Checked baggage allowance will depend on the class of the ticket, and the route travelled - make sure to check the details on your ticket for more information on the luggage allowance for your ticket.

Carry-on baggage that exceeds the carry-on allowance will be sent to the hold and subject to additional charges. Some items will count as special baggage and can be transported at an extra transportation fee - these fees can only be paid in person at the airport, and are subject to space on the aircraft.

For international flights, online check-in is available between 72 hours and 2 hours before flight departure. If it is a domestic flight within Brazil, you can check in online up to 45 minutes prior to departure.

You can now reserve your LATAM Airline seats ahead of time with Alternative Airlines. Find seats with extra legroom, window and aisle seats to make sure you have the most comfortable in-flight experience possible.

Economy Class is LATAM's standard cabin class, with its most basic features and level of service.

Economy Class has a full inflight menu, which is available to order from on both short-haul and long-haul flights.

On long-haul flights, passengers can enjoy the airline's inflight entertainment system, which includes the choice of over 150 films and more than 150 television shows, both suitable for children and adults.

Economy Class seats are each fitted with a personal television monitor, which can be used to watch the airline's inflight entertainment.

Seats are spacious and comfortable, with adjustable headrests and reclinable backs.

Premium Economy passengers can enjoy access to over 300 TV shows and films combined through LATAM's inflight entertainment system. Passengers can also charge their own electronic devices through the charging ports that are located at each seat.

Premium Economy seats are located at the front of the aircraft. The cabin has enough space for 12 seats and is laid out in a 3 x 3 formation. The middle seat in each block of three is kept empty and is converted into a tablespace, which gives passengers extra space and privacy.

Business Class passengers are given access to the airline's airport lounge and can enjoy priority boarding, check-in, disembarkation and baggage collection.

Each Business Class passenger is given access to LATAM's inflight entertainment system, which is available through the personal 15.4-inch high-resolution screen that is fitted to each seat.

Passengers can indulge in the airline's inflight menu, which was created by some of South America's most prolific, world-class chefs. Passengers are given the option to order complimentary hot meals and unlimited alcoholic and soft drinks from the menu.

LATAM's Business Class seats transform into fully-flat beds with the touch of a button. Each seat has touch control which can be used to change the position of the head, back and foot of the seat to whatever position is desired.

Business Class seats are fitted with granite cocktail tables and a personal workspace.

The Business Class cabin is set out in a 1 x 2 x 1 formation, giving each passenger direct access to the cabin aisle. Seats are 23-inches wide and — when in a horizontal position — 76 inches in length. Each seat has a touch-control personal shutter, which gives the passenger ultimate privacy from the rest of the cabin.

You can now pay for flights with Boleto Bancário on Alternative Airlines! Use the search bar above to search flights with LATAM Airlines and select Boleto at checkout. Download your boleto and make your payment at your local bank, Post Office or using your online banking service.

Please click on the logos below to find out more about airlines that fly similar routes to LATAM Airlines:

Mariscal Sucre International Airport is the busiest airport in Ecuador and one of the busiest airports in South America. It is located in the Tababela parish, east of Quito and serves as the largest hub of TAME, the flag carrier of Ecuador, with an average of over 220 weekly flights. Airlines that fly from and to Mariscal Sucre International Airport include Avianca Ecuador (formerly Aerogal) Copa Airlnes, Delta Airlines, Iberia, KLM, United Airlines and Aerolineas. 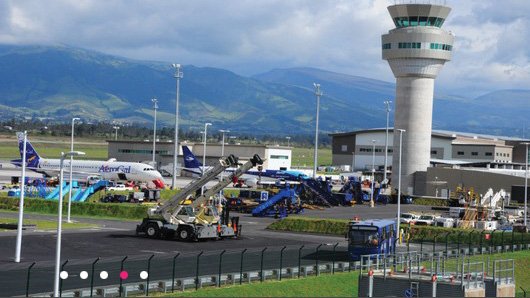 On LATAM offers an exciting selection of movies, series, songs and daily news on board its aircraft. On planes that are not equipped with individual screens, passengers can download the LATAM Play App.

There's a TV show for every taste on board your LATAM flight. Download the LATAM Play app before your flight and stream TV shows directly to your personal device.

Find movies and much more when flying with LATAM. Customers can also download the LATAM Play app to stream content on their mobiles, laptops and tablets.

LATAM Airlines Group has revealed plans to offer its customers new routes to destinations throughout Europe. As part of a larger strategy growth plan, LATAM will launch a new flight between Lisbon Portela Airport (LIS), Portugal, and São Paulo–Guarulhos International Airport (GRU), Brazil, which will begin operations on 3rd September 2018. This flight will operate five times a week and carry passengers on a Boeing 767 aircraft. Additionally, LATAM Group will fly between Munich Airport (MUC) and São Paulo–Guarulhos International Airport early next year. With these two new routes, nine different European destinations will now be home to LATAM services.

LATAM Airlines Group CEO, Enrique Cueto, stated with these new flights LATAM continue to give Latin American's more opportunity to see the rest of the world. LATAM has launched 30 new routes since 2016 which have covered a lot of area across the world.

LATAM Airlines, the parent company of LATAM Airlines Argentina the new brand name for Lan Airlines, has announced that it's in the final stages of integrating in two separate reservations systems into one across its combined carriers.  LATAM and Sabre migrated LATAM Brazil from its legacy reservation system onto LATAM’s SabreSonic passenger services system (PSS).  The well-executed cutover now enables the airline to expand its differentiated yet consistent passenger experience across its entire network. This will allow the LATAM group to grow together, uniting all its airlines and carriers under one industry giant. LATAM will also use a broad portfolio of Sabre solutions to manage its extensive airline operations, such as the pricing and shopping for airline travel ticketing, and day-of-travel operations. LATAM is an important customer for Sabre as, with so many subsidiaries, it is a top priority and a huge undertaking of the company to combine them all under one management system, according to Sabre.