Make a LAN Airlines Booking and Find Some Amazing Deals

In 2012, LAN Airlines merged into LATAM Airlines. Click on the logo below or use our search form to search for flights on LATAM.

LAN Airlines was a Chilean Airline based in the country’s capital, Santiago de Chile. The airline is now rebranded as LATAM Airlines (also known as LATAM Chile) after a merger in 2012 between Chile's LAN Airlines and Brazil's TAM Airlines in which its airline subsidiaries, such as LAN Colombia, (formerly Aires) were integrated into the brand.

LAN Airlines was the flag carrier of Chile and was one of the most recognisable airline brands in South America. It was based at Comodoro Arturo Merino Benitez International Airport (SCL), Chile, and flew to destinations around Latin America, the US, Canada, the Caribbean, Oceania and Europe. LAN had a number of subsidiary airlines, including LAN Argentina, LAN Colombia, LAN Express, LAN Ecuador, and LAN Perú.

In 2010, LAN Airlines signed the agreement with TAM to merge together and create the new LATAM Airlines. This merger was finished in mid-2012 and the LAN Airlines brand was officially dropped with immediate effect. The airline originally launched in 1929, making it one of the oldest airlines in the world at the time that it merged with TAM Airlines.

The weight of the main carry-on bag was 8kg for Economy passengers or 16kg for Premium Economy and Premium Business passengers. The dimensions of carry-on baggage is 55cm x 35cm x 25cm.

The overall dimension of a checked bag needed to be 158 cm (overall) and 23 kg.

LAN Airlines passengers could check-in online via the LAN Airlines website. This was available between 48 hours and 2 hours before scheduled departure time.

Available on many of its flights, Economy Class passengers could enjoy a variety of entertainment using the airline's in-flight entertainment system. This included more than 150 movies and TV shows.

Food and beverages were available to order from the airline's in-flight menu, with warm meals prepared for longer, international flights.

Economy Class seating was comfortable with an ample amount of legroom.

The Business Class cabin was LAN Airlines most-premium and best cabin-class. It provided a high-end cabin and in-flight experience like no other.

Passengers could get delicious meals from the airline's high-class Business Class menu. The Business Class in-flight menu also included an extensive selection of beverages such as beers, spirits and non-alcoholic drinks.

LATAM Chile made the LANPASS frequent flyer program to reward customer loyalty and currently there are more four million members. Each year, more than 250,000 LANPASS members fly for free. LANPASS members earn miles each time they travel with LATAM Chile.

On May 2016, LANPASS became known as LATAM Pass, once LAN Airlines transformed into LATAM Chile.

The airline was part of the Oneworld Alliance who has 13 members in total. Oneworld was founded in February 1999 and it's is the third-largest airline alliance in terms of passengers, behind SkyTeam and Star Alliance.

LAN Chile's fleet included around 140 aircraft at the time that it merged with LATAM, made up from a mix of Airbus and Boeing aircraft. This included the following models:

The airport is Chile's largest aviation facility and the busiest international airport in the country. It is a hub for LATAM Airlines Sky Airline and JetSMART. The airport serves many airlines including Aeromexico, Air Canada, Air France, British Airways, Delta Airlines, Avianca, British Airways, KLM, United Airlines and much more. 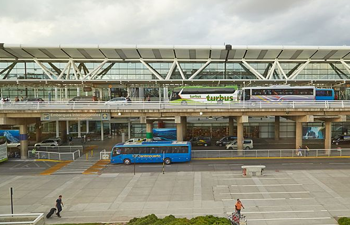