About the Airbus A319

The Airbus A319 is a member of the Airbus A320 family of narrow-body passenger airliners. The A319 is used for short- to medium-range commercial operations. The twin-engine jets are manufactured by Airbus - final assembly of the aircraft takes place in Hamburg, Germany and in Tianjin, China. The aircraft carries 124 to 156 passengers and has a maximum range of 3,700 nmi (6,900 km; 4,300 mi).

As of August 2019, a total of 1,480 Airbus A319 aircraft have been delivered, of which 1,436 are in service. Primary users include easyJet, American Airlines, United Airlines, and Delta Air Lines. American Airlines and EasyJet operate the largest A319 fleets, consisting of 127 and 125 aircraft respectively. 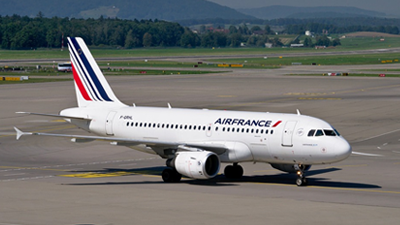 Image: An Airbus A319 operated by Air France.

Technical Spec of the A319

Passenger Features of the Airbus A319

The A319 has the same optimised cabin cross-section as its A320 family members (including the A318, A320 and A321). The A320 family is the widest single-aisle fuselage aircraft on the market. This provides passengers with top-of-the-range comfort, with generous seat width.

A new cabin interior introduced by Airbus for the A320 Family ensures the A319 meets the needs of all passengers, setting a new standard for on-board comfort on single-aisle jetliners. The aircraft has a calm and quiet cabin, with a fresh and lighter new look, more space in the overhead compartments, a noticeable reduction in noise, and options for relaxing ambience lighting.

Some airlines choose extra-wide aisles over slightly wider seats, allowing for a faster turnaround time and more space for passengers to manoeuvre. The pitch and width of seats will depend on the airline. Easyjet's A319's have a 3-3 configuration and seats have a pitch of 29 inches and width of 18 inches in the Economy cabin. American Airline's A319's provide a seat pitch of 30 inches and a seat width of 17/3-18 inches in the Economy cabin.

Which airlines use the Airbus A319?

How can I book flights on the Airbus A319?

When you search for flights through Alternative Airlines it is quick and easy to see which plane will be used on each flight. Just click on the details icon on the flight that you want to search to see if it will be operated with a Airbus A319.

Visit our page 'what aircraft will I fly on?' for more information on how to do check which aircraft you will be flying on.

In December 2010, Airbus announced a new generation of the A320 family: the A320neo. The 'neo' part stands for new engine option. The similarly shortened fuselage A319neo variant offers new and more efficient engines, combined with airframe improvements and the addition of winglets on the end of the wings. The aircraft promises fuel savings for airlines of up to 15%.

The airbus A319 has an impeccable safety record, with no fatal accidents to passengers. Airbus is dedicated to ensuring the highest level of passenger safety.