Make a Reservation with Alternative Airlines

Volaris is a low-cost Mexican airline based in Mexico City, Guadalajara and Tijuana. The airline offers scheduled flights across the Americas, mainly offering domestic flights within Mexico and international flights to the US. The airline has a large route network that includes over 60 destinations. It's currently the main airline in Mexico for domestic flights and is second only to Aeromexico as the most popular airline overall (international and domestic).

Volaris Airlines was founded in 2004 with a goal to run as an ultra-low-cost airline that would offer more access to routes for Mexicans. Its first flight flew in 2006, from Toluca to Tijuana. Later that year, the carrier was then awarded funding of $40 million, which then consolidated investment $130 million, which it used to expand its route offering in Mexico and expanded into other parts of the Americas.

Today, Volaris stands as one of the most important airlines in Mexico, with one of the youngest fleets in the country and more than 200 daily flights.

In 2016, the airline launched its first subsidiary, Volaris Costa Rica, which flies to a number of destinations across Central and North America from San Jose airport. In 2018, the airline revealed plans to launch another subsidiary called Volaris El Salvador. However, as of today, this is still in the process of launching.

Top Tip: If you're planning on travelling to Mexico City, check out our Mexico City travel guide to discover all the best places to stay, eat and visit!

Looking to book fights from the US to Mexico?

You can use the search bar at the top of the page to begin search and book Volaris plane tickets through Alternative Airlines. We are an online travel agent, that makes it easy to book your flights in English, with the support of our English-speaking customer service team. We offer cheap, competitive airfares and let you pay the way you want, whether that’s in USD or Mexican Peso.

Where does Volaris fly? 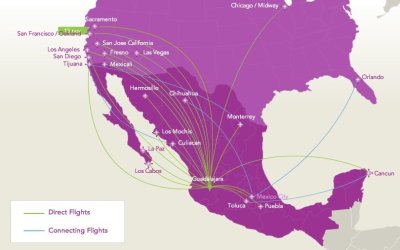 On all Volaris reservations for different fares and routes, all passengers are allowed two carry-on bags. The combined weight of these bags must not exceed 22lbs, or 10kg. The individual bags must not exceed 22.4 x 15.7 x 12.9inches each. Your duty-free allowance, handbags, pocketbook, or purse. These items may not be used as a container to transport articles that would otherwise be regarded as baggage.

The baggage allowance for your Volaris flight will be indicated on your ticket. Checked baggage should not exceed the combined dimensions of 158cm, or 62inches. The weight of these checked bags must not exceed 55lbs or 25kg.

The airline has one cabin class on all flights — Economy Class. As a low-cost airline, the cabin and service are fairly simple and give you everything that you need for a pleasant and comfortable journey.

Seats are set out in a 3 x 3 configuration, with the first few rows offering premium seating with extra legroom.

There's no in-flight entertainment system that allows you to watch TV shows, films or listen to music. However, the airline does have reading materials found in the seat-back pocket of each chair. This includes an in-flight magazine and more.

Light refreshments such as sandwiches, potato chips and alcoholic and soft drinks are available to buy in-flight. The cabin crew will offer these snacks and drinks to purchase after take-off by bringing a trolley down the aisle.

Although it doesn't offer a traditional frequent flyer program where passengers can earn miles to spend on future flights every time that they fly, Volaris does offer a subscription-based frequent flyer program named v.club. All subscribers of v.club are given special prices on flights, exclusive deals and extra baggage on certain fares.

Volaris Airlines passengers can check-in for their flights online, either via the Volaris website, Volaris app or by using Facebook Messenger.

Mexico City International Airport is the hub airport for Aeromexico as well as Aeromar, Interjet and Volaris. The airport has two runways and can handle nearly 40 million passengers every year.

Please click on the logos below to find out more about airlines that fly similar routes to Volaris Airlines:

Pay with a Payment Plan

Pay for your Volaris reservation with a payment plan, when booking with Alternative Airlines. You can choose from Affirm (U.S customers), Fly Now Pay Later, Klarna, PayBright (Canada only) or PayPal Credit.

During the month of September, Volaris has announced that it plans on operating approximately 75% of its capacity. This is in response to a gradual but strong recovery in demand for its flight services, following the COVID-19 pandemic. The airline is focused on maintaining strict health and safety procedures to keep passengers safe.