Jetstar Japan is a low-cost Japanese airline, founded in 2011 and based in Tokyo. The airline commenced services in 2012 and flies to over 10 destinations, 3 international and 10+ domestic. These include Tokyo Sapporo, Osaka, Fukuoka and Okinawa with 20 Airbus A320s flying to 15+ routes across 10+ domestic destinations, plus two routes to Hong Kong and three to Taipei.

Jetstar Japan is a subsidiary of Jetstar, an Australian low-cost airline (self-described as "value-based") headquartered in Melbourne, Australia. It is a wholly owned subsidiary of Qantas, having been created in response to the threat posed by low-cost airline Virgin Blue. The airline is part of Qantas' two brand strategy of having Qantas Airways for the premium full-service market and Jetstar for the low-cost market. Qantas, through the Jetstar Group, also has stakes in sister airlines Jetstar Asia Airways, Jetstar Pacific Airlines and Jetstar Japan.

The airline's fleet currently consists of 70 aircraft including Airbus A320s/A321s and Boeing 787-800 series. The airline previously operated using Airbus A330s and Boeing 717 however they modernised their fleet and changed. The Airbus aircraft is only on domestic routes offering one class, buy-on-board service. Their Boeing 787s are used for their international sectors offering a two class service. Business class is fitted with 21 leather premium class seats in a 2-3-2 configuration. This service is currently inclusive of all meals and beverages, and in-flight entertainment and includes an increased baggage allowance of 30kg.

Jetstar Airways is currently not part of any major global airline alliances however they do offer their passengers a variety of Frequent Flyer programs. Jetstar, being a wholly owned subsidiary of Qantas uses the Qantas Frequent Flyer Program to allow passengers to collect points. They do however also allow programs with the following airlines; Emirates, JAL and Vietnam Airlines, to be used to collect points. 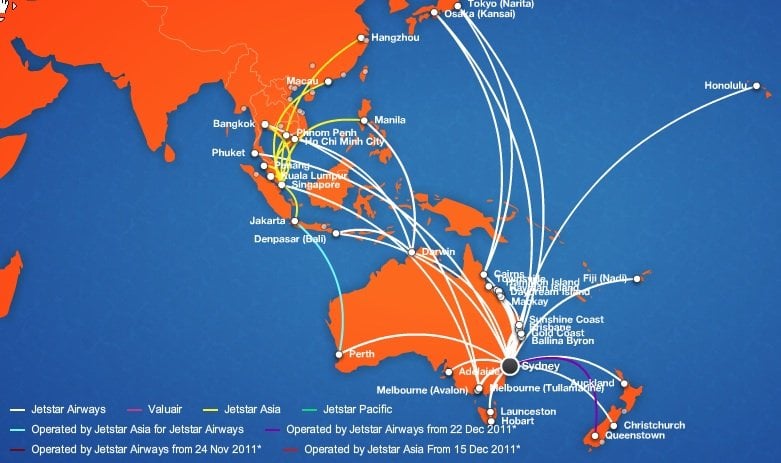 Economy class passengers can enjoy comfortable flights, with added extras such as hot foods, and an in-flight entertainment system on international long-haul flights. Passengers in economy class are entitled to 7kg of baggage.

Passengers in premium economy get even comfier seats, complete with additional legroom and seat selection of the forward, upfront cabin. In addition, passengers enjoy extra baggage, lounge access at some airports and additional points and flexibility when booking.

This class is only available on certain aircraft but provides passengers with extra flight comforts such as additional baggage, meals and refreshments during the flight and an amenity pack. When flying in business class with Jetstar Japan, passengers will have their dedicated check-in area and priority boarding.

Business Class passengers are entitled to 30kg of checked baggage, in-flight entertainment, a blanket, pillow, and comfort pack at no additional cost.

The airline operates a fleet of the following aircraft:

This airport is a hub for Jetstar Japan as well as All Nippon Airways, Japan Airlines, Peach Aviation, Zipair Tokyo and more. Other airlines that fly to/from this airport include Air India, Air New Zealand and many more.

Your carry-on allowance will depend on the fare you purchased at the time of booking. Every standard fare includes 2 pieces of carry-on with a combined weight of 7kg. The main item must fit in the overhead locker and not exceed 56cm (H) x 36cm (W) x 23cm (D). Personal items can include items such as a handbag or a laptop case.

When you book a Flex Bundle or a Business Class fare with Jetstar Japan, you'll be allowed to get a carry-on allowance of 14kg.

When flying on Jetstar Japan's Boeing 787 Dreamliners, there will be a number of in-flight entertainment including movies, TV, games and music.

If you purchased an Economy ticket you can buy your n-flight entertainment when making a booking or before you fly with Jetstar Japan.

On Jetstar Japan flights there will be a variety of delicious meals, kids' snacks and drinks. The food available on board will depend on the flight length aircraft type and destination. Although food isn't included in the Starter Fares, passengers can buy meals and snacks onboard.