Make an Boutique Air Booking and Find Some Amazing Deals

Boutique Air is an aviation company based in California, United States and offers charter and passenger services. The airline was founded in 2007 as an aviation company before it began acquiring aircraft in 2012. The airline operated on-demand charters, air patrol services and pilot training. In 2013, Boutique Air received commuter air carrier authority from the United States Department of Transportation and it's first scheduled flight operated between Hawthorne Municipal Airport and McCarran International Airport in Las Vegas. Boutique Air flies a fleet of Pilatus PC-12 aircraft.

Passengers are permitted one personal item plus one of either 1 carry-on bag or 1 checked bag. The total of these two items must not exceed 50lbs.

Under the health and safety laws at London Gatwick Airport, no bag will be allowed through checking if it exceeds 25kg.

You can check in by visiting the online check-in page and entering your flight details. Web check-in on Boutique Air flights opens 24 hours before flight departure time and closes 45 minutes before. Passengers can choose to either print off their boarding pass or download it to their mobile.

You can check-in at the airport if you arrive at the Boutique Air check-in desks at least 45 minutes before your flight leaves. 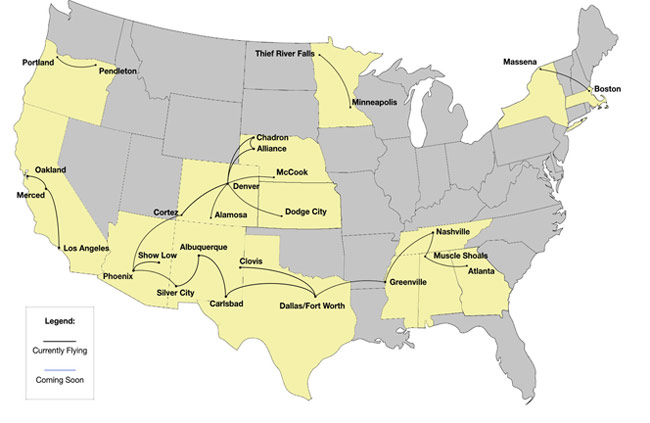 Boutique Air prides itself in offering a first-class experience for the price of economy. Although there is only one class fare with this airline, the flying experience is truly luxury and relaxing.

The aircraft is designed to increase soundproofing, meaning that passengers are not disrupted by the engine sounds.

The total number of seats in the aircraft is typically between 8 and 9 passengers, meaning that the level of service from the staff is superior.

Economy Class seats are made from leather and provide the ultimate comfort allowing you to arrive at your destination well-rested, meaning that passengers are not disrupted by the engine sounds.

Please click on the logos below to find out more about airlines that fly similar routes to Boutique Air:

San Francisco International Airport is located downtown San Francisco, CA, USA. As the largest airport in Northern California, it is also the seventh-busiest airport in all of the United States, and 24th busiest in the world by numbers of passengers. For example, in 2018 the airport saw nearly 57.8 million passengers through its doors.

Alaska Airlines and United Airlines also have hubs at this airport. There is also a number of other airlines who operate services from this airport including JetBlue, China Eastern Airlines, Air Canada and Air France.

Boutique Air will begin flyinga service between Massena International Airport (MSS) and Boston Logan International Airport (BOS). The airline isto launch the service on 1st June 2018 and will fly three times a week between the two cities on the east of the USA. Boutique Air will carry passengers on the Piatus PC-12 aircraft and the flight is estimated to take 1 hour and 30 minutes, covering 262 miles.

Boutique Air exploring the option of Boston flights from Massena

Despite deliberating over the addition of Baltimore and albany flights, Boston may be the overall winner in an attempt to increase the number of passengers booking flights with Boutique Air. Boutique Air Chief Executive Officer Shawn Simpson said the number of passengers flying out of Massena wasn’t as high as expected during the airline’s first year of operation as Massena’s Essential Air Service provider. For instance, he said, its planes are only 40 percent full for flights to Albany International Airport.

Dodge City Airport celebrated as Boutique Air made its first flight between Dodge City and Denver. The airline, which is based in San Fransisco had the route approved last November and the airport now sees the route as an essential addition to Dodge City's air space. Boutique air offers 18 round trip flights to the Mile High city each week, most of which occur on a week day.