Take a look at Hawaiian Airlines for similar routes.

Hawaii Island Air, also known as Island Air, was a commuter airline based in Hawai and more specifically in Honolulu. Hawaii Island Air was Hawaii’s second oldest carrier with routes to six of Hawaii’s major airports, with direct and nonstop services between five islands in Hawaii. In-Flight Services included refreshments and Kikaha magazine.

The airline operated scheduled inter-island passenger services in Hawaii. Its main base was at Honolulu International Airport on Oahu, with a hub at Kahului Airport on Maui. Island Air flew to many destinations including Lanai, Maui and Oahu and operates a codeshare and frequent flyer agreement with United Airlines. Island Air also had an interline agreement with American Airlines. Aloha Airlines was formerly an airline partner until it discontinued passenger operations.

Hawaii Island Air maintained a codeshare and frequent flyer agreement with United Airlines. Hawaiian Airlines halted its commercial relationship with Island Air in 2012 when it announced plans to begin operating ATR-42s in the islands under its own brand. Island Air also operated its own frequent flyer program, Island Miles (formerly Cloud 9).

At the time that it ceased operations, Island Air's fleet consisted of Bombardier Q400 turboprop aircraft. In its history, the airline flew a number of different aircraft, including the ATR 42, ATR 72, and Saab 340 turboprop, which was leased from American airline, PenAir.

Hawaii Island Air had a codeshare agreement with United Airlines and Mileage Plus members can earn and redeem Mileage Plus miles on Island Air flights. Island Air also operated its own frequent flyer program called Island Miles with benefits and rewards.

Save money on your next Hawaii Island Air flight reservation with any flight promo code and Alternative Airlines. Pay with PayPal to get a discount on any Hawaiian airlines by using a discount code via www.alternativeairlines.com. Save today on any flight with Hawaii! 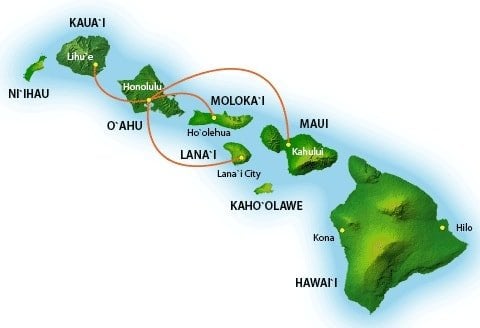 The airline, which shuttled passengers between islands, closed after falling short of its revenue expectations for the last four years. Island Air filed for bankruptcy protection on October 16, according to the Associated Press