Fly Jamaica Airways was a Jamaican airline headquartered in Kingston, Jamaica. Fly Jamaica Airways's main hub was at Norman Manley International Airport (formerly Palisadoes Airport) which is an international airport that serves Kingston. In September 2012, Fly Jamaica Airways was certified by the Jamaica Civil Aviation Authority (JCAA) and was then permitted to operate in the United States later that year. The airline's inaugural flight to New York took place in February 2013. In June 2014, Fly Jamaica Airways acquired a new Boeing 767-300ER which was flown to Kingston to commence their flight schedule. The new aircraft was to increase flight operations to New York, to a daily service. Fly Jamaica was founded in 2011 and started operations on February 14, 2013. In that first year, it carried roughly 50,000 passengers.

In March 2019, the airline was forced to terminate all operations after a long spell of financial trouble.

Fly Jamaica Airways flew to many destinations in North and South America :

Fly Jamaica Airways allowed customers flying in all classes to bring on one carry-on bag at a maximum weight of 10kg. The bag had to fit within the overall dimensions of 115cm.

Economy Class offered a simple but comfortable cabin. Seats were set out in a 3 x 3 formation.

Business Class seats were set out in a 2 x 2 formation. The extra space within the cabin allowed each seat to be larger than Economy Class seats.

Fly Jamaica Airways was based at Norman Manley International Airport, which is the main airport serving airport for Kingston in Jamaica and is located 19km from the centre of New Kingston. It is Jamaica's second busiest airport, serving over 1.5 million passengers annually. Over 130 international flights per week depart from Norman Manley International Airport. The airport is also the hub for Caribbean Airlines. This airline also operates flights for a number of airlines, including British Airways, JetBlue Airways, WestJet, and previously Air Jamaica. 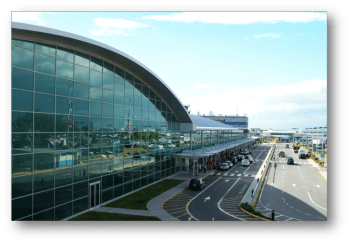