Search and buy flights to Pompeii with Alternative Airlines! Discover the closest airport to fly into to visit Pompeii, as well as which airlines to fly with.

Pompeii is a vast archaeological site, spanning 70 acres (and growing, as the site continues to be excavated). The once thriving Roman city was buried under meters of ash following the catastrophic eruption of Mount Vesuvius in 79 A.D.

Today, Pompeii is a UNESCO World Heritage site and visitors are free to explore the excavated ruins of the villas, streets, and public buildings that made up the city. 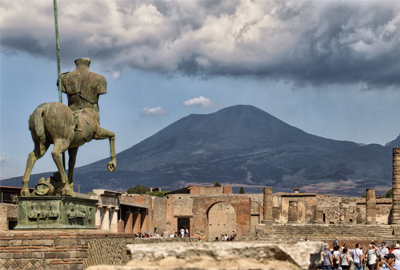 What airport to fly to for Pompeii?

There isn't an airport in Pompeii. However, there are airports nearby. Most tourists heading to Pompeii will fly to Naples, which has the closest airport to Pompeii. It is easy to then travel from Naples to Pompeii town, where you’ll find the archeological site.

Top Tip: You can use the search bar at the top of the page to start searching and comparing flights to Naples International Airport.

How far is Pompeii from Naples?

Naples is 27 km (16.7 miles) from Pompeii by car. The journey from Naples International Airport to Pompeii by car will take about 25 minutes.

Naples is located 28 km (18 miles) from Pompeii’s main station (located just a few minutes walk from the main entrance to the archeological site) by train. If you choose to travel from central Naples to Pompeii by train the journey will take about 45 minutes. If you travel from Naples International Airport straight to Pompeii the journey by train will be between an hour and an hour and a half.

Buses take roughly 35 minutes to reach Pompeii from Naples, with regular departures from the airport.

Airlines that fly to Naples

Fly to Pompeii from the USA

Fly to Pompeii from the UK

Flights to Naples take just over two hours from the UK. A number of airlines fly directly from across the UK. EasyJet, for example, flies from Bristol, Edinburgh, Gatwick, Stansted and Liverpool. British Airways offers a number of daily services from London Gatwick, along with Ryanair, Tui Airways, and Jet2.

Top Tip: If you’re a UK resident, you can spread the cost of your flights with Klarna or pay later with PayPal Credit.

Fly to Naples from Europe

Fly to Pompeii from Asia, Africa, Australasia, and elsewhere around the world!