Founded in 2013, Canada Jetlines is an upcoming ultra-low-cost airline based in Hamilton, Ontario. The airline will base itself at Vancouver International Airport and will offer low-fare domestic flights within Canada, as well as international flights to other parts of North and Central America.

At this time, the airline is yet to have a launch date set in place. It originally planned to launch in late 2018/early 2019 but the date has been pushed back a number of times.

Jetlines doesn't have any aircraft within its fleet at this time. The airline did have an order of Airbus A320s, set to be delivered in late 2019. However, due to a delay in its launch, the airline had to cancel these orders.

Vancouver International Airport (YVR) is a Canadian airport in Richmond, British Columbia and is the hub airport for Canada Jetlines. The airport is split into three terminals, has three runways and facilitates flights from airlines flying to destinations in North America, Central America, Europe and Asia. Vancouver International handles over 25 million passengers per year.

Other than Jetlines, Vancouver International is also a hub for Air Canada, Air Canada Express, Pacific Coastal Airlines and WestJet. 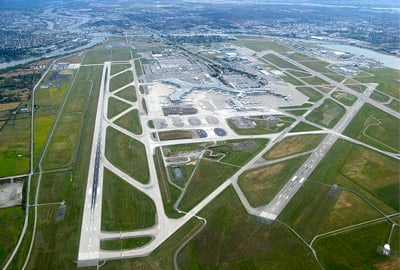