Make a Meridiana Reservation and Find Some Amazing Deals

Meridiana ceased operations is 2018 and rebranded to Air Italy. Check out our Air Italy page to find out more on the airline and search for flights on Air Italy.

Meridiana was an Italian airline that offered scheduled and charter passenger flights. The airline was based at Olbia Costa Smeralda (OLB) and, in the year that it shut down, offered flights to destinations across Europe, South America, Africa and to New York City.

The airline launched in 1964 under the name Alisarda and flew its first series of flights in 1964 with domestic services from Sardinia. The airline rebranded to Meridiana in 1991, which is what it was known as until ceased operations.

At the time that it ceased operations, Meridiana was part-owned by Qatar Airways and the original company that launched the airline, Alsirada. In March 2018, the two companies agreed to shut Meirdiana down and relaunch it as Air Italy, with many of the flights on Meridiana's route network transferred over to the new airline.

Historically, the airline has also used aircraft from other manufacturers, including Airbus (A320 family) and regional jets from ATR, British Aerospace and McDonnell Douglas.

Passengers are allowed 1 piece of carry-on baggage with the sum overall dimensions of 115 cm and 1 piece of a personal item with a dimention of 40x30x15 cm.

Meridiana did have online check-in and online allowed passengers to check-in luggage in advance, select your seat, meal options and much more, before you depart for the flight.

Meridiana airport check-in was available at its airports. 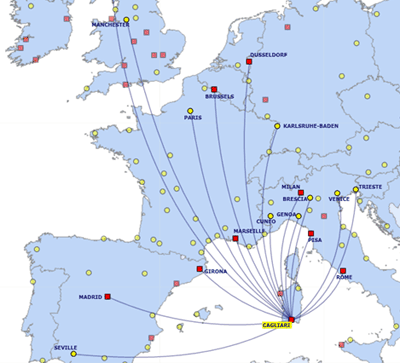 The Economy Class cabin was spacious and comfortable.

Passengers could order a range of snacks and drinks from the airline's in-flight menu, with hot meals served on long-haul flights.

Passengers were given a number of benefits on the ground, including access to the airline's airport lounges and priority boarding and check-in.

In-flight, passengers were treated to hot meals, snacks and drinks from the airline's Business Class menu.

The Business Class cabin also featured a shared TV screen, which showed movies for passengers to enjoy. Each passenger was given their own set of headphones, which they can plug into the audio socket found on the arm of their seat.

Business Class seats were wider and gave significantly more legroom than seats in Economy Class. The Business Class cabin was set out in a 2 x 1 x 2 formation

Passengers in Business Class could enjoy movies selected by the airline and shown on shared screens. Passengers were given headphones to plug into the connector on the seat of the aircraft so that they could each hear the audio from the movie.

In addition to meals, passengers could order a selection of snacks (sweet and salty) and hot, cold, alcoholic and non-alcoholic beverages on all flights.

Meridiana didn't have a WIFI network.

The airline didn't have any information regarding its special service online.

The airline operated a frequent flyers program called Meridiana Club to reward regular travellers, in partnership with Avios. Avios is the reward currency of frequent flyer programs run by Iberia and British Airways. Avios can be collected as everyday purchases with the help of a card similar to a credit card. Avios are awarded from the moment the flight is booked and can be summed to those earned with flights from Iberia and British Airways in connection flights or flights completely booked with them. They can be exchanged for reward flights with any of the airlines that make this alliance.

Meridiana Club offered different levels of membership in order to reward its regular passengers, such as increased baggage allowance, access to priority check-in counters and more. There were three levels of Meridiana Club, the standard Fly Pass, Fly Pass Silver and Fly Pass Gold, with each offering a varying number of benefits.

Olbia Costa Smeralda Airport (OLB) is an airport in Olbia, Sardina and was the hub airport for Meridiana. The airport mainly facilitates flight from airlines flying seasonal services to destinations within Italy and throughout the rest of Europe. However, airlines such as Vueling, easyJet, Transavia and Volotea operate year-round flights to/from the airport.

Currently, the only airline that uses Olia Costa Smeralda Airport as a hub is Air Italy. 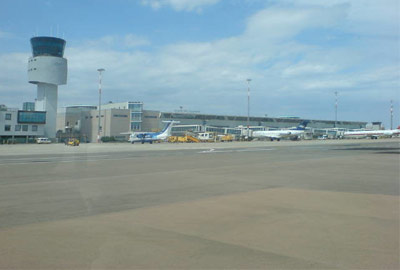