Unfortunately, in February 2020, AtlasGlobal suspended all operations — please use the flight search above to find alternative airlines to the AtlasGlobal flight that you wanted or visit the pages below.

Important information, 27/11/2019: Atlasglobal has suspended all operations. Search for flights on similar airlines by using our search form.

Atlasglobal was a Turkish airline headquartered at Istanbul Atatürk Airport, Istanbul. The airline offered scheduled domestic and international passenger flights to destinations across Europe and Asia. Overall, AtlasGlobal flew to over 25 destinations on a scheduled basis and also offered charter flights.

The airline launched in 2001, initially only flying charter and cargo services under the name Atlastjet International Airlines. It flew its first scheduled flights in 2004, offer both domestic and international flight immediately.

In 2015, the airline rebranded to AtlasGlobal, which is the carrier name and brand that it used until it stopped flying. It also owned a subsidiary airline, called AtlasGlobal Ukraine, which operated flights in Ukraine from Istanbul.

Atlasglobal had a fleet of over 15 aircraft, with all planes manufactured by Airbus. The airline had models such as the Airbus A319, A320, A321 and A330. 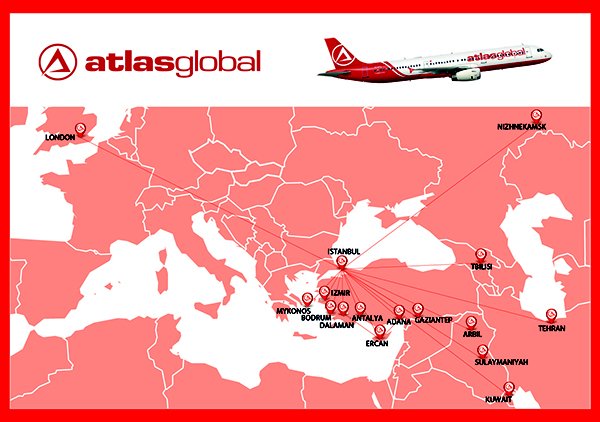 Economy Class passengers were entitled to one item of free carry-on baggage with a maximum weight of 8kg.

Business Class passengers were entitled to two items of free carry-on baggage with a maximum weight of 16 kg overall.

In addition to this, passengers were allowed a free personal item, such as a purse, handbag, laptop and bag or other small item.

Passengers checked baggage allowance depended on the route flown and the cabin class and fare that passengers flew in.

Passengers could book extra baggage when they bought their Atlasglobal flight with Alternative Airlines.

Passengers could choose to check-in at the airport using the self-service machine or by visiting the check-in staff. Passengers should have arrived at the airport at least 3 hours before scheduled departure time for their flight.

Economy Class was Atlasglobal's most basic cabin class but still offered a high-quality cabin with a professional service.

Passengers were served complimentary food and drink on all flights and could select their seats at check-in.

Business passengers could benefit from fast track and lounge service. There were various refreshment areas within IGA Lounge which had a spacious and refreshing atmosphere. These lounges offered wireless internet and access to electrical outlets.

Passengers could also enjoy fast track and lounge service, as well as a minimum of 30 kg baggage allowance, priority check-in, a free meal and drink service.

Furthermore, passengers could the flying chef service, which was available on all flights lasting at least 3 hours, with exclusive tastes from Turkish and world cuisine.

Large leather seats could be adjusted to a sleeping position, with legroom of 100 cm (39").

There was no& in-flight entertainment system onboard AtlasGlobal flights, however, the airline did have an in-flight magazine that passengers could enjoy.

There was no WIFI system onboard any Atlasglobal flights.

Atlasglobal offered all passengers complimentary food and drinks on all flights. On select international flights, passengers were served a hot meal, inspired by Western and Turkish cuisine.

There was an Atlas Junior Club card full of special opportunities and gifts for children.

Atlasglobal wasn't a member of any airline alliance. However, it did have codeshare agreements with Air France, KLM and Air Serbia.

Istanbul Airport was the main international airport in Turkey and the hub airport for Atlasglobal. The airport has one terminal, four runways and acted as the main gateway into the country. The airport opened in 2018 and has the capacity to handle 90 million passengers per year. Once fully completed, it was expected to be able to handle up to 200 million passengers per year.

You could pay for Atlasglobal flights with PayPal or PayPal Credit when booking through Alternative Airlines. It's was a safe and easy way to pay and a great way to save money on Atlasglobal reservations with an available flight coupon.

Although AtlasGlobal has now ceased, you can still book flights on 600+ other airlines at Alternative Airlines.

AtlasGlobal has ceased operations. The airline had faced financial trouble in recent years and temporarily suspended all flights late last year. After restarting flights in December 2019, AtlasGlobal announced last month that it will suspend flights again on a temporary basis, with plans to re-launch on 9th February. However, when flights didn't relaunch, it raised suspicions amongst those in the airline industry that AtlasGlobal might not return.

On 12th February 2020, the airline filed for bankruptcy and posted a final 'goodbye' message on its social media channels. This news comes just a day after another European carrier, Air Italy, ceased operations.