American Airlines is one of the big 3 major airlines in the US, the other 2 being United and Delta. The airline has a diverse route map operating to hundreds of cities across the US and internationally, from one of their hub airports, with its main being Dallas/Fort Worth International Airport (DFW). The airline is one of the largest commercial air carriers globally and operates services from the US to South America, the Caribbean, North America, Europe, the Middle East, Asia and Oceania. American Airlines has a diverse fleet enabling it to serve these long-haul destinations, however, regional brand American Eagle also offers international services to Canada, Mexico, South America and the Caribbean. Find out more on where the airline flies to outside the US below and book today with Alternative Airlines. 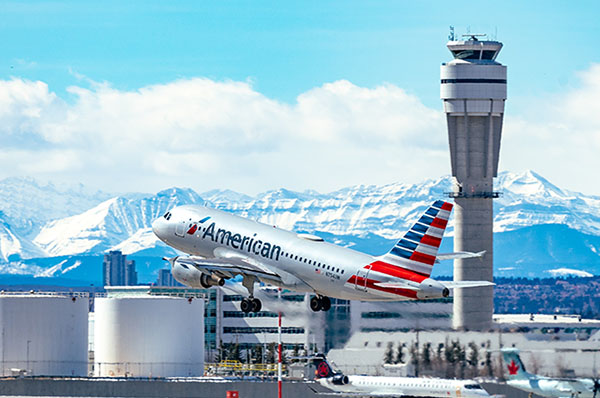 St Vincent and the Grenadines

American Airlines offers 3 fare types within their international economy class. These are basic economy, main cabin and main cabin extra. If travelling on a basic economy ticket then you are entitled to 1 free cabin bag and only on flights to the Middle East, Asia and Oceania is 1 piece of checked luggage is included. All passengers in the airline's main cabin are allowed 1 cabin bag, as well as 1 checked suitcase and their main cabin extra passengers, are allowed 1 case plus 2 cabin bags. On all international flights, complimentary drinks and snacks are provided, however, only on long-distance international service is a meal included in the ticket. The airline offers free entertainment on select aircraft with personal seatback TV screens, but this depends on the aircraft. However, American offers entertainment through its app which can be used with the wifi facilities onboard. If travelling on a main cabin extra ticket then you can also expect to have extra legroom, compared to the standard economy seats.

On select aircraft* American offers a premium economy experience, with increased comfort and luxury from economy. If you have selected this cabin then you can expect a much larger leather seat with increased legroom, helping you to stretch out during the flight. Prior to departure, the airline allows you to pass the queue at check-in with a dedicated lane, then speed through security with fast track before heading to the gate with priority boarding, after business and first. American allows you a free checked bag as well as their standard cabin allowance including 1 cabin case and 1 personal item. You will also be treated to a full meal with complimentary soft and alcoholic beverages, dine whilst watching the latest movies and shows on the seatback TV screens or browse the internet on the airline's wifi, at an additional cost. American even goes one step further and offers an amenity kit and sleep kit on select flights to help you get a good nights rest onboard. as well as an amenity kit

American Airlines offers their premium business class product on international as well as some domestic services. Depending on the aircraft and route travelled you may be flying in the airline's flagship business class which includes a larger seat that is able to lie flat, turning into a comfortable bed. Just like the premium economy passengers, you can whizz through check-in with a dedicated business class area and cut the lines at security with a priority lane. This means you'll have more time to spend in the airline's lounge sipping champagne and having a complimentary meal. Don't fill yourself up, because you will also receive a full complimentary meal onboard, designed by James Beard, which also includes alcoholic beverages. Stream hundreds of movies, shows, music and games all through the inflight entertainment screens at your seat or surf the net on one of the airline's wifi packages. Pamper yourself with the airline's luxurious amenity and sleep kit and if arriving into London Heathrow, make use of the arrivals lounge to freshen up! Bring all you want with you with a generous allowance of 1 cabin bag and 1 personal item plus 2 checked bags.

If wanting to have the most luxurious experience onboard then book the airline's first-class cabin. From the moment you arrive at the airport until the moment you leave at the other end, you will be treated like royalty. American offers their first-class passengers a private check-in experience away from the rest of the airport making it a stress-free and quick experience. You can head straight through security with expedited security and go to the dedicated airport lounge while you wait for your flight. Enjoy luxurious meals, snacks and premium beverages all complimentary. When it is time to board the flight, then you will be the first so you can sit and relax in the airline's spacious leather upholstered seats which recline into a bed helping you to rest easy. Feeling a bit peckish? Then dine on a premium full course meal inspired by James Beard with full bar service including premium wines and spirits. Sit back, relax and enjoy the hundreds of movies and TV shows available on the inflight entertainment or stream Apple TV shows via the airline's app over the inflight wifi facilities. American offers a generous baggage allowance with 1 cabin bag and 1 personal item being allowed onboard plus an astounding 3 checked bags! Enjoy complimentary Shinola and D.S. & Durga amenity kits, as well as a Casper, sleep set to help you get comfortable during the flight.Like the airline's business travellers if arriving into London Heathrow then make use of the arrivals lounge to freshen up.

Flagship first class is only available on B777-300

How do I book International American Airlines Flights?

To book an international flight on American Airlines, use our simple flight search tool at the top. Tell us where you are departing from and where you plan on travelling to. Set the dates, travel class and passengers then run the search. You will then be shown all of the flights and configurations available for you, you can filter this and set American Airlines as the only airline to see these fares only. What's better is you can then sort these results by price as well as departure times helping you find the flight suited to your plans or budget.

Not only have we made searching for a flight super easy, but paying is also simple and flexible too. Easily pay in USD, MXN, CAD, EUR, GBP and more, we accept over 160+ different currencies making it flexible for you. When buying your flights we also accept Visa, AMEX, Diners Club, Mastercard and other platforms for you to pay in full. But we want to make things that bit more flexible so also offer multiple 'buy now, pay later' plans such as Zip, Klarna, Afterpay and more, helping you get your flights today and spread the cost. To book or find out more use the search tool or contact our customer service team.