Air Deccan is a domestic Indian airline that offers scheduled flights. The airline is based at Chhatrapati Shivaji Maharaj International Airport, Mumbai (BOM) and offers domestic flights throughout India. Although the airline flies to some of India's major airports, such as Indira Gandhi International, New Delhi (DEL), Air Deccan puts a focus on flying to destinations within India that have little that other major Indian airlines don't fly to. Overall, the airline flies to more than 15 destinations.

Air Deccan's fleet is made up entirely of regional Beechcraft B 1900 D aircraft. The airline currently has three of this aircraft type within its fleet.

Cebgo flies to over 30 destinations within the Philippines.

Passengers aren't allowed a suitcase or large bag as carry-on baggage. However, they are allowed to bring a small personal item with them, such as a handbag, briefcase, laptop and case, diaper bag, small backpack or small duffel bag.

Passengers can check-in at the airport by presenting the relevant travel documents to a check-in agent at the check-in desk at the airport. Airport check-in opens 24 hours before scheduled flight departure time and closes 45 minutes before.

Air Deccan has an all Economy cabin. The Economy Class service is delivered by the airline's attentive cabin crew, who are able to help you with any requests.

There are no food services on Air Deccan flights. However, the cabin crew do offer each passenger a complimentary bottle of water and hard candy.

Due to its short flight times and small aircraft, there's no WIFI onboard flights.

Currently, Air Deccan doesn't have a frequent flyer program that allows members to collect points and spend them on future flights.

Air Deccan isn't part of an airline alliance, as its primary goal is to serve destinations that not many airlines fly to.

Chhatrapati Shivaji Maharaj International Airport is the primary international airport serving the Mumbai Metropolitan Area in India and is the hub airport for Air Deccan.

It's the second busiest airport in the country and has been the main airport in Mumbai since it opened in 1942, handling around 50 million passengers per year.

Other than Air Deccan, the following airlines are also based at Chhatrapati Shivaji Maharaj International Airport: 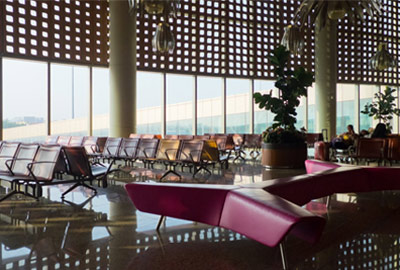