Ukraine International Airlines, also known simply as UIA, is Ukraine's national flag carrier, and also the largest airline of Ukraine. The airline's head office is located in Kiev, and has its main hub at Boryspil International Airport (KBP).

The airline operates flights to over 85 destinations across Europe, the Middle East, American and Asia, combining both domestic and international passenger flights with cargo flights.

The airline was created in 1992, starting flights later that year from Kiev to London. Overtime, the airline gained more shareholders, investing in new aircraft and developing new routes.

In March 2018, the airline announced a fleet modernisation programme which will see the Boeing 737 Classics being replaced with newer aircraft. The table below summarises the state of the current fleet, correct as of October 2019.

Ukraine operates both domestic flights within Ukraine, and also international flights to Europe, Asia, Africa, the Middle East and America. The table below is the current destinations that the airline flies to. 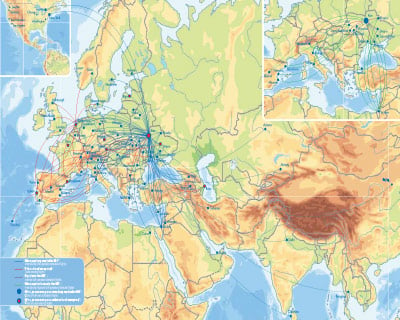 For Economy Lite flights within Ukraine and medium-haul flights, passengers are permitted 1 x7kg of hand baggage, which must not exceed the dimensions of 40 x 55 x 20cm.

For long-haul business flights, passengers are permitted 2 items of hand luggage weighing no more than 15kg combined, each measuring a maximum of 40 x 55 x 20cm, plus one smaller item of 30 x 40 x 10cm which must not exceed 5kg.

Each item of checked luggage must not exceed the dimensions of 158cm for combined linear dimensions (height + length + width).

Passengers using an Economy Lite fare are not allowed any free checked baggage.

Passengers in Economy Premium and Economy class have the maximum weight of 23kg, however, the items permitted may vary depending on your route or fare purchased.

Passengers travelling in Business Class are allowed 32kg of checked baggage. However, the number of items will vary depending on the fare and route flying.

Passengers who are Panorama Premium Cardholders or Panorama Elite Cardholders may also get additional items of baggage.

Airport check-in on most flights opens 2 hours before flight departure time and closes 40 minutes before. However, with flights to certain destinations or from certain airports the opening and closing time will differ. For example when flying the route Bangkok-Kyiv or New York-Kyiv, airport check-in opens 4 hours before but closes 1 hour before the flight is due to depart.

Airport check-in can often be a more expensive option, with economy class passengers having to pay €15 to check-in at the airport. 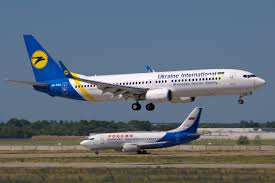 In economy class, passengers receive a blanket for the flight, and can use the monitors onboard Boeing 767-300 aircraft. On long-haul flights, passengers will either get a full three-course meal, or sandwich or a light snack, depending on the route flying. In addition, passengers can purchase drinks and snacks elsewhere during the flight.

Economy Premium is now available on both UIA's long-haul flights, but also medium-haul flights. It is described as the all-inclusive economy package, which includes the same cabin and seat on the plane as economy, but with added extras such as increased baggage allowance, onboard meals and prefered meals. Passengers can also check-in at the airport free of charge and can enjoy priority boarding.

On long-haul flights, passengers get even more legroom at 38 inches, with cosy reclining seats. Passengers also receive an amenity kit featuring a blanket, flight socks, earplugs and an eye mask.

Passengers can choose to upgrade to business class on selected flights, for more comfortable and spacious seating, delicious fine dining and a variety of drinks.

On long-haul flights, the business class cabin contains luxurious and comfortable leather seats, which boast legroom of 57 inches, lie-flat seats with adjustable footrests and monitors for entertainment. Passengers in business also have fast-track security and boarding, and access to the Business Lounge. Passengers get a personal travel kit with all the amenities of Premium Economy plus a shoehorn, makeup bag, cushion and comb. In addition, passengers can choose from a selection of delicious meals with a complimentary bar service throughout the flight.

There is currently no first class on UIA. Upgrade to a business class for a premium flying experience.

Please click on the logos below to find out more about airlines that fly similar routes to Ukraine International Airlines:

Although it may vary depending on the aircraft and length of your flight, the Boeing 777-200ER aircraft provides passengers with widescreen monitors (9 inches in economy and 16 inches in business) in each seat. Passengers can enjoy over 80 Hollywood, Ukranian and International movies including the latest releases, TV shows and series, children's films and cartoons. In addition, there is a wide variety of albums and games, all of which is available in different languages from Ukranian, English, Russian, Chinese, French and more.

Passengers may get complimentary food included on their ticket fare. However, if they have purchased a lite fare which does not include food, or they wish to purchase additional food, passengers can purchase this online.

There is not yet any onboard WiFi available on Ukranian International Airlines flights.

Passengers collect miles per $1 USD they spend on air tickets, which can later be spent on rewards when enough have been collected. Rewards include UIA flights and partner code-share flights.

Although UIA is currently not part of any airline alliance, it has a number of codeshare agreements with airlines such as Azerbaijan Airlines, Iberia, EgyptAir and Air Moldova.

UIA is happy to transport dogs and cats only, as long as they have been contacted well in advance. Depending on the weight, the animals will either have to go in the cabin or in the hold luggage. See our tips and advice for transporting special service animals and pets here.

UIA offers an unaccompanied minor service for children that are travelling without an adult. Visit the UIA website or contact the airline direct for more information and to request this service.

Chairman of AirlinePros, James Foster, expressed that they're very pleased to become the GSA for Ukraine International Airlines in Canada. He added that he's confident that the company's connection with members within the Canadian aviation industry will big a big factor in getting UIA the recognition that it's seeking for.

Ukraine International Airlines Communications Director, Evgeniya Satska, stated that the revival of this route helps with the ongoing development of their regional flight schedule.

Ukraine International Airlines, based in Kyiv, recently grew out its fleet by adding an extra Boeing 737-800 Next-Generation aircraft. The new jet was delivered to the airline's hub, Boryspil International Airport (KBP) and is the 30th medium-haul B737 within their fleet.

UIA Communications Director, Yevhenia Satska, stated in a press statement "UIA continues its rapid fleet renewal program. Currently, our fleet contains 30 Boeing 737 Next-Generation aircraft. This year, UIA plans to phase out the last three of its Boeing 737 Classic models from the fleet. All our passengers will now be provided with quality service and comfort on more modern aircraft".

The new Boeing 737 is expected to operate commercial services in the latter stages of May.

The Ukranian carrier has started operating a service that connects Ukraine's capital, Kiev, with India's capital, Delhi, with the first flight having taken place on 1st May. The airline will fly between its airport hub, Boryspil International Airport (KBP), and Indira Gandhi International Airport (DEL) three times a week. The airline will carry passengers on the Boeing 767 aircraft and the journey will take an estimated 6 hours and 55 minutes.

This adds to an array of other Asian routes that are currently on Ukraine International Airlines schedule, including Bangkok, Beijing, Colombo, and others.

Ukraine's largest airline, Ukraine International Airlines(UIA),CEO Yuriy Miroshnikov said Ryanair has started selling tickets for flights at Kyiv's Boryspil airport without getting permission for the timings. This is encouraging the carrier to consider legal proceedings, depending on whether or not its complaints about airport slots are addressed. "Slots which they are expecting to receive are all occupied by Ukraine International flights, transit flights, where the connecting times are very important, where we know, we already understand that airport infrastructure in these peak times is a bottleneck for us," he said. Hopefully, the matter will be sorted amicably by the two airlines.

Ukraine's airlines serviced a total of 10.6 million passengers in 2017. 5 Ukrainian companies transported 93% of the total amount of passengers handled by Ukrainian airlines. The five that did so were Ukraine International Airlines, Windrose, Azur Air Ukraine, Atlasjet Ukraine and Bravo Airways, according to the Center for Transport Strategies citing the statistics published by the State Aviation Service of Ukraine.

Although statistics into which airline carried which proportion of passengers remains unpublished, it said that Windrose boosted its handling 2.5-fold, compared to the 2016 results. At the same time, Atlasjet Ukraine saw a 73.8% rise, Bravo Airways increased its figure by 49.9%. Also, Azur Air Ukraine and Ukraine International Airlines increased their handling by 17.2% and 16.5% respectively. Earlier it was reported that in 2017 Ukraine International Airlines handled a total of 6,93 million passengers.

Altogether, in 2017, a total of 18 Ukrainian airline companies took passengers to the sky. According to the State Aviation Service, charter flights saw the highest growth pace among Ukrainian airlines – 49.2%. A total of 3,8 million of Ukrainian passenger reportedly took charter flights. 85% of such flights were operated by just four airlines: Windrose, Ukraine International Airlines, Azur Air Ukraine and Bravo Airways. Nevertheless, the majority of Ukrainian passengers travelled via scheduled flights – 6.8 million of Ukrainian citizens took this route. This figure indicates an 18% rise from the year before. Altogether, Ukraine’s corporations engaged in aviation services handled a total of 10.6 million passengers.

Ukraine International Airlines had to make an emergency landing at Tbilisi airport, en-route from Kiev. It is believed that the aircraft was forced to land at Shota Rustaveli International airport due to issues with its braking system. None of the 132 passengers and 6 crew were injured in the process and local authorities were on stand-by to aid their departure.

Ukraine International Airlines commenced flights to Krakow on 26 December, the airline’s second destination in Poland after Warsaw Chopin. Initially launched six times weekly, the route will operate daily from 8 January on ERJ 145s. The airport pair was last served in November 2011 by Aerosvit Airlines which ceased operations in 2013.

Ukraine International Airlines commenced flights to its second destination in Poland after Warsaw Chopin on 26 December, a 789-kilometre link between Kiev Boryspil and Krakow. Initially launched as a six times weekly service, the route will increase to a daily rotation from 8 January. The carrier will operate the route using ERJ 145s which are operated by Dniproavia. There is no direct competition on the airport pair, with the route having last been flown in November 2011 by Aerosvit Airlines, a carrier which ceased operations in early 2013.