Make a Reservation and Find Some Amazing Deals

MyWay Airlines is a Georgian airline that flies scheduled passenger flights. The airline is based at Tbilisi International Airport (TBS) and, at this time, offers flights back and forth to Tel Aviv, Israel.

The plans for a new airline in Georgia to launch were announced in 2016. But it wasn't until February 2018 that the Georgian Civil Aviation Authority issued the airline with an operator's certificate (AOC) and operating licence to MyWay Airlines.

In early April 2018, MyWay Airlines commenced operations, flying its inaugural flight from its hub, Tbilisi Internation Airport (TBS) and Teran Imam Khomeini International Airport (IKA). Since then, the airline has continued to offer regular scheduled international flights to Tel Aviv, as well as a few other destinations on a charter basis.

The airline flies between Tbilisi, Georgia and Tel Aviv, Israel. The airline also flies to Batumi and Kuwait on a charter basis. 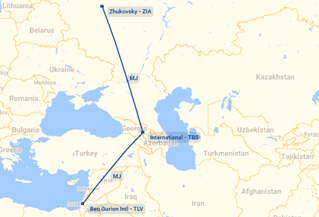 Passengers flying on MyWay Airlines in economy class are entitled one item of carry-on baggage free of charge. This baggage must not exceed 10kg.

Passengers flying on MyWay Airlines in business class are entitled to one item of carry-on baggage free of charge. This baggage must not exceed 15kg.

Passengers flying on MyWay Airlines in economy class are entitled to one item of free checked baggage. This baggage must not exceed 25kg.

Passengers flying on MyWay Airlines in business class are entitled to one item of free checked baggage. This baggage must not exceed 35kg.

The airline is a full-service commercial airline. Both of the Boeing aircraft are equipped with 8 Business and 162 Economy class seats.

Please note that there's no screen and no inflight magazine. There are back-of-seat trays for laptops and to place food and drink. There is overhead storage. Depending on the length of flight, snacks, meal trays and hot/cold beverages are served.

Seats are configured in a standard 3-3 formation.

On-board meals are complimentary. Hot beverages and meals are served in china ;mugs and plates.

In a separate section of the cabin, enjoy extra legroom, extra seat width and reclining seats.

At this current time, Myways airline does not offer inflight entertainment system or magazines.

At this current time, Myways airline doesn't have any WiFi services on flight.

Myway Airlines is yet to offer online check-in for their flights.

MyWay Airlines airport hub is Shota Rustaveli Tbilisi International Airport (TBS), which is the main international airport in Georgia, located southeast of the Georgian capital, Tbilisi. The airport was built in 1952 with just one terminal. By 1981 Tbilisi International Airport (TBS) became the 12th largest airport in the Soviet Union, with around 1.5 million passengers flying from Tbilisi to other countries within the Soviet Union each year. In 1990, the airport built a second terminal, however, despite the extra space and opportunity for more flights, the airport's yearly passenger traffic lowered to 230,000 people. Tbilisi International Airport's (TBS) passenger growth rose again through the 2000s, the airline enjoyed a particular rise in growth between 2009 and 2016 when the airport's passenger traffic grew from around 730,000 people per year to 2.2 million people per year.

The airport is also a hub for Georgian Airways. Other airlines that fly to and from Tbilisi International Airport (TBS) include SkyUp, Qeshm Air, Pobeda, Jazeera Airways, Israir Airlines, Ellinair, Armenia Aircompany, Belavia, Wings of Lebanon, YanAir and previously Saratov Airlines before they ceased operations.

China Airlines offer a range of special services to its many passengers. Please see below the following services it offers:

If you are in require wheelchair assistance at the airport, you should inform the airline& at least 72 hours prior to departure. You can request this service by getting through to the airline's customer service; or the Alternative Airlines customer service team if you have booked through our website. For more information on this please see our wheelchair assistance page.

Myways Airlines offers services for unaccompanied minors. These services are for young passengers from the ages of 5 and 16 years who are travelling without parents or guardians and who are under 18 years of age. For more information on this contact the airline or alternatively, contact us at Alternative Airlines. Also, you can find more information on our unaccompanied minors page on this.

For flight safety and health of the passenger, pregnant passengers at 28-week may be allowed for travel. A medical certificate must be shown for pregnant mothers between 30 to 36 weeks’. Myways Airlines doesn't allow passengers to travel when they are 36 weeks and more pregnant.