Make a Tigerair Australia Booking and Find Some Amazing Deals

Tiger Australian flies domestically across 19 domestic routes (21 with the addition of new routes Brisbane – Whitsunday Coast and Brisbane to Perth launching in 2017) and to 12 destinations around Australia. The airline currently operates over 400 domestic flights per week, with around 72,000 seats per week available.

Passengers on Tigerair Australia are entitled to one item of carry-on baggage plus an additional small bag, such as a handbag, camera or laptop. The item off carry-on baggage must weigh no more than 7kg and must fit within the dimensions of 54 x 38 x 23cm.

Checked baggage is available to purchase. The amount and pricing of baggage will depend on the route that you're flying. No one piece of baggage can weigh more than 30kg.

Passengers can check-in for their Tigerair Australia flight up until 45 minutes before scheduled flight departure time. Passengers can choose to either visit a Tigerair Australia check-in counter or use the self-service kiosk to check-in. We recommend you arrive at least one hour and a half before your flight if you choose to check-in at the airport to give enough time before your flight departs.

Pay with PayPal and PayPal Credit

TigerAir Australia is based at Brisbane Airport, which is the primary airport serving Brisbane and South East Queensland. Over 31 airlines serve the airport who fly to over 50 domestic and international destinations. Brisbane Airport also serves as a hub for Virgin Australia and a secondary hub for Qantas and Jetstar. Other airlines that fly to Brisbane Airport include Fly Corporate, Air Niugini, Nauru Airlines, Samoa Airways and Solomon Airlines. 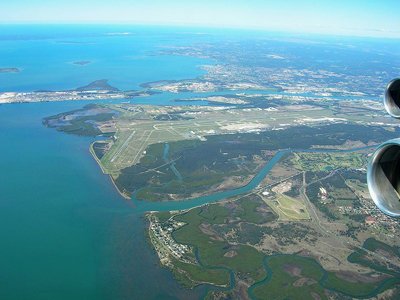 Tigerair recenetly announced it will recommence its Hobart- Gold Coast route. Starting from the 30th October 2018, the Australian low-cost airline will recommence the flight route three times per day. It is the only low-cost carrier to operate this route.

To celebrate the end of the financial year, Tigerair Australia have announced a sale, selling tickets from $40.25. These new domestic deals should keep the Australian airline warm this winter! The promotion will last for all flights during August but you will have to take a mid-week flight in order to score the best deals! All sales fares exclude checked baggage, in-flight meals and entertainment but at these prices, who cares!

Extreme weather conditions have caused flights to be cancelled out of Melbourne Airport. low clouds and poor visibility, in the wake of an oncoming storm, have wrecked havoc on flyers plans in the last hours, including Qantas flights. Tigerair, or Tiger Airways, however, have confirmed that it did not cancel any of its services due to these conditions. Although safety Tigerair's main priority was safety, it wanted to keep passenger disruptions to a minimum.