Flysmaland operates to four destinations, including Vilnius in Lithuania, Berlin (Tegel Airport) in Germany, Vaxjo in southern Sweden and during the summer months, the Swedish island of Visby.

Stockholm Bromma Airport  is a Swedish domestic and minor international airport in Stockholm. It is located west northwest of downtown Stockholm and is the closest to the city compared to the other commercial passenger airports in the area around Stockholm (Arlanda, Skavsta and Västerås). Bromma was Sweden's fifth largest airport by passenger traffic as of 2008 and third largest in terms of take-offs and landings.Airlines that fly from and to Stockholm Bromma Airport include airBaltic,British Airways and Brussels Airlines . 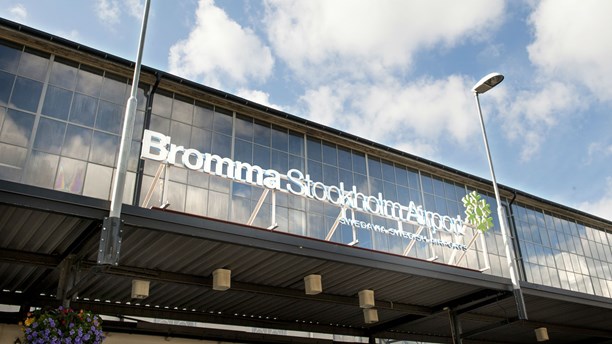 Flysmaland is a Swedish regional carrier based at Stockholm-Bromma Airport, operating flights to Berlin, Vilinius Visby and Vaxjo. Flysmaland flights Flysmaland is a small Swedish regional airline operating from Stockholm Brooma airport to four destinations Vilnius in Lithuania, Berlin (Tegel Airport) in Germany, Vaxjo in southern Sweden and during the summer months, the Swedish island of Visby. Flysmaland use Saab 340 aircraft operated by the Sweish carrier, Avitrans. Flysmaland Sweden Flysmaland was called Stockholmsplanet until late in 2007. It is one of a growing number of small Swedish regional airlines connecting smaller airports with other small airports and continental Europe. Expect to jump on board an immaculate 33 or 34 seater aircraft built locally.
READ MORE ABOUT FLYSMALAND