Search and buy domestic flights within South Korea with Alternative Airlines! Discover airlines that offer domestic flights, complete with route and baggage information. Also, check out our list of FAQs…

What are domestic flights?

A domestic flight is a flight which departs and arrives within the same country. The flight route will not cross the border of the country. Domestic flights are usually short-haul with a duration of up to a couple of hours. 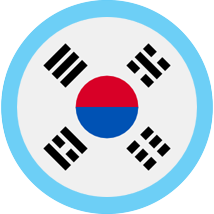 South Korea has one of the fastest growing aviation markets in Asia. There are two full-service carriers dominating the market: Korean Air and Asiana Airlines. But in recent years, there have also been an abundance of low-cost carriers (LCC's) making an appearance, providing quick and affordable travel and fueling demand from travellers. LCC’s in South Korea are as follows: Jeju Air, Jin Air, Air Busan, Eastar Jet, and T’way.

Three new airlines, Aero K, Air Premia and Fly Gangwon, aim to launch operations by the end of 2020. All are also licensed as LCCs.

It's quick and easy to use the Alternative Airlines search bar to discover domestic flights within South Korea! Simply type in your chosen departure and arrival airports or cities to start searching.

What airline to choose? We’ve compared all the airlines operating domestic flights in South Korea to help who decide who to fly with.

If you're looking to fly in full comfort, choose one of South Korea’s full-service carriers.

Korean Air remains the market leader, as the largest full-service carrier in South Korea. Passengers flying with Korean Air can enjoy a premium experience, with a number of benefits included in the price of the ticket. For example, the Economy Class on Korean Air is being upgraded to not only include a comfortable wide seating but an individual TV screen. As standard, all Economy passengers can relax with 118-degree reclining seats, which provide personal comfort unlike any other Economy Class seat.

Asiana Airlines is a South Korean airline headquartered in Asiana Town, Seoul. The airline is the second largest full-service airline South Korea, behind Korean Air. The airline operates a number of domestic routes, connecting Seoul with cities including Jeju, Yeosu, and Busan.

Asiana Airlines is another full-service carrier which operates a number of domestic flights in South Korea. Complimentary amenities for all passengers include in-flight dining service with a tasty selection of quality meals of Korean cuisine. There are also games, TV screens, and even writing supplies!

If you’re looking to travel on a budget, and don’t mind skipping benefits such as complimentary food and checked baggage allowance, then a low-cost carrier (LCC) is for you. In recent years, a number of LCC’s have sprung up in South Korea, providing affordable travel on the country’s most popular routes.

Jeju Air is the largest low-cost airline operating in Korea. The carrier serves one of the most popular domestic routes in South Korea: Gimpo Airport to Jeju Airport. The airline also operates 20 major routes to destinations within Asia, including Japan, China, Taiwan, Philippines, Vietnam, Thailand and Guam.

Jin Air is a Korean low-cost airline, based in Seoul. The airline is a subsidiary of Korean Air and is the second-largest low-cost carrier in Korea, following Jeju Air, and is one of the most well-connected in the country. As well as providing international flights, the airline connects some of the most popular cities in South Korea, including Busan, Cheongju, Gwangju, Jeju, and Seoul.

Air Busan is a smaller low-cost carrier, based near Busan. The airline is a subsidiary of Asiana Airlines and operates both domestic and international flights from its base in Gimhae International Airport. One of the most popular routes is Jeju to Busan.

Hi Air was established in 2017 and is on a mission to become South Korea's leading domestic carrier, focused on connecting small and underserved medium-sized cities. The airline currently flies to the following cities: Seoul/Gimpo, Ulsan, Jeju, Sacheon, and Muan.

T’Way was established in 2010 and is another low-cost airline based in Seongsu-dong, Seoul. The airline connects Seoul with a number of domestic destinations including Busan, Daehu, Gwangju, Jeju, and Muan.

Jeju Island is known for its popular beach resorts and dramatic volcanic landscape. The island is one of the country's favourite domestic holiday destinations.

Airlines that fly to CJU:

Busan is a large, scenic port city in South Korea, is known for its picturesque beaches, mountains and temples.

Airlines that fly to PUS:

How many airlines are in South Korea?

What is the baggage allowance on a domestic flight in South Korea?

The baggage allowance will depend on the airline you are flying with.

The allowance will also depend on your ticket fare, but the following information can be used as a guide:

Did you know? If you require additional baggage, you can add baggage to your booking during the flight booking process.

Do I need a passport for a domestic flight in South Korea?

Adult passengers will need to present valid identification at the airport checkpoint in order to travel. On domestic flights, it isn’t necessary for South Korean residents to bring their passports. ARC card, driver’s license, passport, or government-issued welfare card are all valid forms of identification. International travellers are advised to carry their passports.