The airline operates passenger services to the main destinations in Tanzania including Julius Nyerere – Dar Es Salaam International Airport (DAR) and Kigoma Airport (TKQ). Air Tanzania was relaunched in 2007 after its five-year partnership with giant South African Airways was dissolved when it commenced operations from Dar es Salaam - Kilimanjaro - Mwanza.

Air Tanzania has codeshares with Air Uganda and Air Zimbabwe and was established in March 1977 to operate the services suspended following the break up of East African Airways which was jointly owned by Tanzania, Uganda and Kenya. In November 2011, Air Tanzania resumed services following the return of one Dash 8-Q300.

In the summer months of 2019, the airline started new routes to Johannesburg, South Africa and Mumbai, India. These routes are fully operated by the Boeing 787-8 Dreamliner and the Airbus A220-300.

Passengers are given a free carry-on baggage allowance of 7kg.

Online check-in is available through the Air Tanzania online check-in page. To check-in online, passengers must enter their PNR and full name.

Airport check-in is available by visiting one of the Air Tanzania check-in agents at the check-in counters. Passengers must have the relevant travel documents with them to complete check-in at the airport. Air Tanzania recommends that passengers arrive at least two hours prior to departure for domestic flights and at least three hours prior to check-in for international flights. This will ensure there is enough time to check-in, drop the baggage and pass security.

Passengers can stay entertained on the flight with Air Tanzania inflight magazine TWIGA - Secret Safari. The airline doesn't currently offer any meals on board.

Air Tanzania has WiFi onboard. All you will need to do is to launch your web browser, which will display the log-in web portal. From the portal, simply select your preferred price plan. Note that on-board Wi-Fi is only available on certain aircraft.

Passengers can sit comfortably in padded seats, which have headrests and armrests for your convenience. There is under-seat storage, overhead storage compartments, and fold-down trays.

Can I pre-book my Air Tanzania seat?

At the moment, the airline does not pre-allocate seats. Seat allocation will be arranged during the boarding process.

Air Tanzania offer a number of special services to its passengers. Please see below the following services it offers:

If you require wheelchair assistance at the airport, you must inform Air Tanzania of this at the time of your booking. You can request this service by getting through to the airline's offices; or the Alternative Airlines customer service team if you have booked through our website. For more information on this please see our wheelchair assistance page.

If you’re arranging for your child to travel by themselves, you would need to book through the unaccompanied minor service, your child will be received at the originating airport, taken care of during their travel and while onboard the aircraft. The child will be handed over to the person designated by the parents/guardians upon arrival at their destination. Note: To use the unaccompanied minor service, an adult fare needs to be purchased for the child. For more information on this contact the airline or alternatively, contact us. Also, you can find more information on our unaccompanied minors page on this.

For the safety of the soon to be born baby, it's recommended that all expectant mothers inform their doctor before booking their ticket and inquire about their health to fly the length of the trip they intend to take.

You may be asked to show certain medical forms before flying. For your own safety of the child, Air Tanzania will not accept expectant mothers who are pregnant from their 32 weeks or beyond.

Air Tanzania is not currently part of an airline alliance.

Air Tanzania does not currently offer a frequent flyer program.

As of October 2019, Air Tanzania flies to seven international destinations including Comoro, Burundi, Uganda and recently added routes of South Africa, Zimbabwe, Zambia and India. Air Tanzania also flies to 10 domestic destinations from its hub at Dar es Salaam's Julius Nyerere International Airport (DAR). The airline is also set to start flying to Thailand and China by the end of 2019.

Air Tanzania flies to all major cities, as well as numerous smaller airports, across the Tanzania: 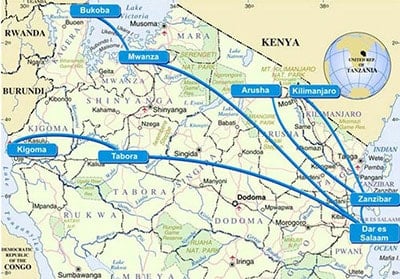 The airport has two runways and can handle nearly 4 million passengers each year.

Airlines that fly similar routes to Air Tanzania include Fastjet, Auric Air, Precision Air and Coastal Aviation. Find out more about other airlines that fly to safari destinations here.

The Tanzanian government has announced that it has set plans to buy a third Boeing 787-8 Dreamliner to add to its fleet of 12 aircraft by 2020.