Air Iceland is a regional airline headquartered at Reykjavik Airport in Iceland. The airline flies to domestic destinations in Greenland and to the UK and Iceland. Air Iceland is the subsidiary of Icelandair Group. Air Iceland was formed in 1997 as a merger between Icelandair Domestic and Norlandair.

The head office of Air Iceland Connect is located in the capital, Reykjavik, but the company's registered domicile is in Akureyri, the main town in north Iceland. Both Reykjavik Airport and Akureyri Airport serve as hubs for Air Iceland Connect route network. The airline's fleet consists of Bombardier Q400 aircraft, Q200 and Fokker 50s

Is Air Iceland Connect the same as Icelandair?

All flights are operated under the Icelandair brand.

Where does Air Iceland Connect fly to?

Air Iceland offers passengers to carry up to 6 kg in carry-on baggage. Passengers are requested to keep hand luggage to a minimum since there is limited space in the overhead compartment on board. The maximum size of hand luggage is 55 x 35 x 20 cm.

Economy Standard: Luggage included, but cancelation is not permitted.

Economy Light: The cheapest fare, ideal if you're traveling light. No baggage included. 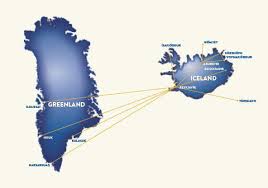 Please click on the logos below to find out more about airlines that fly similar routes to Air Iceland:

How can I book Air Iceland Connect flights?

Does Icelandair fly to the Faroe Islands?

Icelandair used to fly to Vágar Airport, Faroe Islands. If you want to fly to the islands, Atlantic Airways operates regular flights to/from Iceland. Visit our flights to the Faroe Islands page to find out more.