Ravn Alaska (formerly Era Alaska) offers scheduled passenger and cargo services to more than 100 communities in the U.S. state of Alaska. The airline has a subsidiary airline in the form of Northern Pacific Airways.

The airline has been connecting some of the 'Last Frontier’s' most famous destinations, including Anchorage, Fairbanks, Bethel, Cordova, Homer, Valdez, Kenai, Kodiak and beyond. As well as scheduled passenger flights, Ravn Alaska offers cargo transportation for goods up to 6,000 pounds, and has private charter authority to fly in Alaska and Canada.

Looking for flights within Alaska?

Find the best Ravn airfares available and get ahead of the latest deals when you search for Ravn Alaska reservations with Alternative Airlines.

Ravn Alaska connects remote communities and major cities in Alaska. To find out more information about flying internally within the US, read our page on domestic flying within the United States. It includes information on baggage and check-in times, the best airports to go to and of course, some FAQs!

Due to the 2021 pandemic, the airline massively scaled down their operations and now only operating to 11 destinations including Anchorage, Fairbanks, Bethel, Cordova, Homer, Valdez, Kenai, Kodiak and beyond. 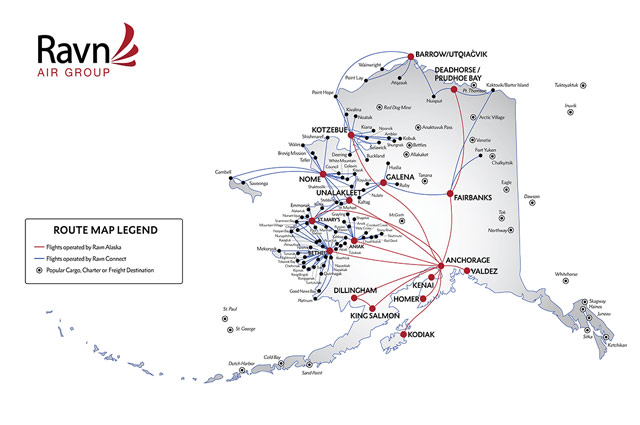 When making connections to another carrier, you will be subject to the fees of the most significant carrier’s rules. For example, if you are connecting from any Ravn Alaska flight to Alaska Airlines from Anchorage to Seattle or beyond, Alaska Airlines’ baggage rules and fees will apply as they are the largest portion of your journey.

2 checked bags, up to 50 pounds each, free of charge on Ravn Alaska operated flights.

An excess baggage fee will be charged for each additional piece of checked baggage.

Excess charges apply only when traveling solely on Ravn Alaska-operated flights. Styrofoam containers will not be accepted for transport. When checking more than 2 items, the additional items will be loaded on a standby/space available basis and handled in accordance with voluntary separation baggage rules: when check-in requirements are not met or you have exceeded the checked baggage piece limit (more than 2), it is possible your baggage may not arrive on your flight with you. If this occurs, your baggage will be sent on the next available flight, space permitting. It is the responsibility of the customer to return to the airport for the retrieval of the impacted baggage upon notification of arrival.

Airport check-in times will depend on the airport you are departing from, and so it is advised to check on the airport's website.

Passengers can enjoy their flight in Rain Alaska’s only class; economy.

This is a simple but effective class which offers passengers an enjoyable and comfortable flight.

Passengers can enjoy the in-flight service, which includes complimentary soft drinks, and a selection of beers and wine available to purchase.

The airline offers open seating, meaning that you choose a seat once onboard the aircraft.

Other airlines flying in and out of the airport include Grant Aviation, United Airlines, Delta, Allegiant Air, Alaska Airlines, American Airlines and many more. Mostly operating seasonal services.

Today, Ravn Air Group, the parent company for Ravn Alaska, announced that the US bankruptcy court has authorised a sales process for its three subsidiary airlines and assets in order to keep the airline and company alive. Ravn Air Group has been given a deadline of 24th June to receive bids for the sale process.

Ravn Air Group, the parent company for Ravn Alaska has filed for Chapter 11 bankruptcy as it has struggled with financial difficulties since the loss of passenger sales throughout the COVID-19 pandemic. Since the pandemic, like many other airlines, Ravn Alaska has seen passenger traffic drop by 90%.