Devon, in the South West of the U.K., is renowned for its assortment of things to do, see, eat and enjoy. With two strikingly different coastlines, beautiful beaches, rugged Dartmoor National Park and of course the Devonshire cream tea, there really is something for everyone. So there's no surprise that each year Devon attracts thousands of domestic 'staycation' tourists and international travellers alike.

To begin searching for flights to Devon, you can use the search bar at the top of the page. It's quick and easy, simply enter your departure airport or city, and enter 'Exeter' as your chosen Devonshire arrival airport.

Top Tip: Discover how Alternative Airlines can make it much more affordable to book flights to Devon, by helping you spread the cost of your flights over time! 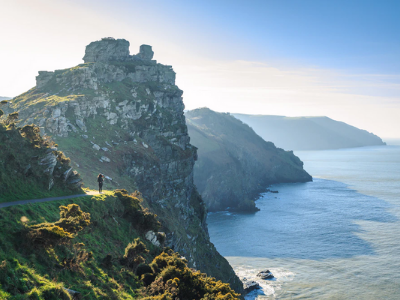 How To Fly to Devon

The nearest airport to Devon is Exeter (EXT) Airport. Serving the city of Exeter, the airport is located in Eastern Devon, and is perfectly located for onward connections via public transport to your chosen final destination within Devon. During the peak season (summer months) there are a number of daily flights between Exeter and cities across the UK. It's easy to book a domestic flight to EXT from elsewhere in the UK, including Belfast, Edinburgh, Glasgow, and elsewhere.

You can fly to/from Exeter to/from the following airports in the UK. But please note that some of these routes are seasonal, and only operated during peak summer months.

You can also fly to/from Exeter to/from a number of international destinations in Europe, including Spain, France and Greece. Note that some of these routes are also seasonal, and may only be operated during the summer months.

Here at Alternative Airlines, we're experts when it comes to making it easier, quicker, and more affordable to book flights online. It's our mission to help everyone book the flights they want, while offering options to spread the cost over time. That’s why we’ve partnered with many leading ‘Buy Now, Pay Later’ payment plan providers. At checkout, you can select one of our long-term or short-term payment plan options, and split the cost of our airfare over a fixed number of weekly or monthly instalments.

If you’re a UK resident, you can choose from Zip, Klarna, and PayPal Credit. But no matter where you're booking from, you can spread the cost of your flights with one of our many payment options.

How long does it take to fly to Devon?

For domestic travellers, it’s super quick to fly to Exeter Airport in Devon. The duration of the flight will depend on your departure airport. From Jersey the flight is only 45 minutes with Blue Islands. From Edinburgh or Glasgow, the flight is 1 hour and 30 minutes with Loganair.

What airport do I fly to for Devon?

The main airport in Devon is Exeter Airport (EXT). EXT is an international airport, located at Clyst Honiton (East Devon), close to the city of Exeter. From Exeter Airport, it is easy to make onward connections via public transport to popular destinations in Devon.

Is Exeter Airport the only airport in Devon?

Exeter Airport is the largest airport in Devon and primary airport serving the city of Exeter. There are other aerodromes and smaller private airports, but these do not provide scheduled passenger flights. The next closest passenger airport is Bristol (BRS), which is located 63 miles away.

Which airlines fly to Devon?

Routes from the South West of the UK, including to Cornwall and Devon, were reduced drastically after Flybe ceased operating in 2020. However, there are a lot of popular domestic UK airlines that fly to Exeter airport from cities across the UK. Loganair operates the most domestic flights. Tui Fly also operates international flights to destinations in Spain, Greece, islands in the Caribbean and elsewhere.

Can I fly directly to Devon?

Yes you can! So where can you fly directly to Devon from? From Devon there are regular direct flights to domestic destinations in the UK, including: Belfast, Edinburgh, and Norwich. It is worth noting, however, that some of these direct flights will be seasonal.

Can I fly directly to Devon from the US?

Unfortunately, there aren’t any direct flights to the US from Devon. However, it is still quick and easy to reach the US via an onward connection, at Belfast International Airport for example.

Can I fly abroad from Devon?

Yes! During the summer months, there are a number of international flights operated from Exeter by Tui Fly. Popular destinations include: Tenerife and the island of Tenerife, in Spain, Ibiza, Lanzarote, and Menorca, as well as lots of other locations in Europe. But for other international destinations within Europe or elsewhere, a layover will need to be made at another UK airport.

Do I need a passport to fly to Devon?

This will depend on whether you already reside in the UK. If you are a UK citizen, you do not need a passport — although it is recommended to carry a form of government issued photo ID, such as a driver’s license. International visitors will require a passport to fly into the UK, and may be asked to present their passports when flying domestically within the UK.

Where can I book flights to Devon?

You can book flights to Devon through Alternative Airlines! You can easily book flights with any of the popular airlines in the UK, including Blue Islands and Loganair. For more information, take a look at our guide to domestic flights within the UK. Use the search bar at the top of the page to begin your search.

If you've enjoyed this guide to flying to Devon, you may also be interested in some of our other useful guides:

Top National Parks in the UK