Domestic Flights within the UK

Domestic Flights in the UK

Book your domestic flights within the UK with Alternative Airlines. A guide to flying domestically within the UK, including which airlines to fly with and useful FAQs.

What are domestic flights within the UK?

UK's domestic flights can be taken on many different airlines, such as British Airways, Virgin Atlantic and Emirates. Airlines such as Jet2 and easyJet are low-cost airlines, meaning they offer a cheap option.

Sadly, British carrier Flybe ceased operations in March 2020. Flybe provided more than half of UK domestic flights outside London. Please take a look at our list of domestic airlines in the UK to discover alternative carriers, many of which are taking over the routes that Flybe operated.

Why book domestic flights in the UK?

Whether you're travelling with the family on a holiday, commuting to work, or visiting a friend, there are many occasions when catching a local flight could be ideal for you.

The UK as a country can be described as diverse, breathtaking and full of history. Whether you'd like to visit the astonishing National parks the UK has on offer, have a cup of tea at the Queen's Buckingham Palace, take a glimpse of London from the London Eye or just relax on some of the UK's 700 beaches. The UK is packed full of adventure, amazing landscape views, historical landmarks, nature, food and much more.

The UK has domestic flights flying from all of its major cities, such as London, Bristol, Manchester, Cardiff, Glasgow, and Edinburgh. You may find that during the cheapest times to fly, airports such as Glasgow Prestwick Airport and Liverpool Airport offer low-priced domestic flights. 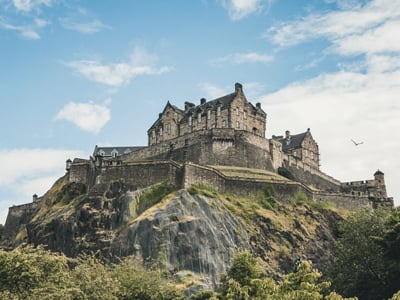 Edinburgh Castle, one of the iconic landmarks in the city of Edinburgh, Scotland.

Are you planning to travel to multiple destinations? If so then take a look at our multi-city flight planner guide. You can also check out our direct flight guide as you may want to fly direct from one destination to another without having any stopovers.

AIRLINES THAT OPERATE DOMESTIC FLIGHTS IN THE UK

The following airlines fly internally within the UK.

We've also included the advised check-in times for domestic flights. Please click each airline for a full guide and more information, including baggage allowance, class fares, and information on the onboard experience.

Aurigny Air Services is based in Guernsey, and is a small carrier that operates to and from the Channel Islands. Fly between London Gatwick and Guernsey with Aurigny.

Airport check-in: Airport check-in closes between 90 minutes and 2.15 hours before departure - more information can be found by visiting our Aurigny airline guide.

Blue Islands also operates flights to and from the Channel Islands. The small airline flies to UK cities including London, Southampton, Newquay, Bristol and Cardiff.

Airport check-in: The airline suggests checking the check-in times of the airport you are flying from.

British Airways is the largest airline in the UK, operating a vast network of both international and domestic services. UK destinations that British Airways operates between include London, Edinburgh, Glasgow, Manchester, Inverness, Aberdeen, and Isle of Man.

Online and mobile check-in: Available between 24 to 1 hour before flight departure.

Airport check-in: Closes up to 45 minutes before departure.

EasyJet is a British low-cost airline carrier based at London Luton Airport, with a vast network across the UK and Europe.

Online and mobile check-in: Available between 30 days and 2 hours before flight departure.

Like easyjet, Jet2 (Jet2.com) is a low cost airline. Although the airline’s main focus is on its flights to Europe, the airline also operates a number of domestic UK services. Its main base and headquarters is at Leeds Bradford International Airport, with further bases at Manchester, Belfast International, Edinburgh, Newcastle, East Midlands, Glasgow-International airport.

Online and mobile check-in: Check in online from 28 days and up to 5 hours before your flight.

Loganair is the UK’s oldest operating airline. The airline is based in Scotland and specialises in services to the highlands and islands. The airline's main hub is at Glasgow Airport (GLA), with secondary hubs at Aberdeen Airport, City of Derry Airport, East Midlands Airport, Edinburgh Airport, Inverness Airport, Kirkwall Airport, Norwich Airport, and Newcastle Airport.

Whether you need to quickly fly back home to visit family or want to take a last minute vacation, it is easy to pay for flights using PayPal when you book through Alternative Airlines.

If you're a UK resident, you can can also pay later with PayPal credit, and back back the cost in easy, manageable monthly instalments. Find out more about PayPal and PayPal Credit by visiting our PayPal page to discover all our options.

London (All Airports) to Edinburgh (EDI)

London (All Airports) to Belfast (BFS)

Aberdeen (ABZ) to London (All Airports)

Do I need a passport if travelling within the UK?

UK nationals do not need a passport but it’s advised that you carry photographic identification with you when travelling, such as your passport or driving licence. This may be requested at certain points in your journey, such as when you board the plane. Children under the age of 16 years do not require identification to travel.

What form of id is needed for UK domestic flights?

UK nationals do not need to show a passport to fly domestically within the UK. However, it is advised to carry photographic identification. If you have a passport, this might be the easiest form of identification to bring with you. A government-issued form of photo identification, such as a valid Drivers Licence, will also be accepted.

How early do I need to arrive for a domestic flight in the UK?

Normally, domestic passengers wouldn't need to arrive as early as they would if they were travelling internationally. Above you’ll be able to find some of the latest check-in times for UK's popular airlines helping you plan your arrival at the airport.

How much baggage can I take on a domestic flight in the UK?

You will need to find out baggage allowance with the airline you’re flying with as it differs from airline to airline. However, when you click on the above airline links you’ll be to find out more on the baggage information for that specific airline.

Can I book domestic flights in the UK online?

The answer is yes, you can. You can book as many domestic flights in the UK online with Alternative Airlines as you want. You can simply do this by entering in your flight search in the search bar above, choose your flight and continue with the payment process.