Bergen Air, also known as Bergen Air Transport, is an airline based at Bergen Airport, Flesland in Norway.

Bergen Air Transport was founded in 1998 and commenced operations in 1999.

The airline initially provided 4 round trips a week and in 2001, increased to 5. Bergen Air offers scheduled services between Bergen and Notodden Airport, Tuven and operates two 12 seater Beechcraft B200 King Air aircraft and one 7 seater Cessna Citation CJ2.

The airline was established in 1998, offering seaplane charter flights using Cessna 421 aircraft. The service to Notodden started in 2000; a Cessna 441 was acquired in 2003, and from 2006 the company has used two Beechcraft. In 2007, Bergen Air Transport bought a new hangar at Notodden, giving it further space for expansion and for new departure and arrival facilities.

Bergen Air is a privately owned airline and has grown consistently since its launch in 1998.

The service from Bergen to Notodden is a direct service every weekday, only taking 40 minutes flight time.

Departure from Bergen: Check-in is handled by Widerøe.

Departure from Sumburgh: Check-in is handled by Loganair.

Departure from Notodden: Check-in is handled by our own staff.

Maximum 10 kilos of luggage is allowed (to be checked in). An additional small purse/PC-bag can be brought into the cabin. Please note that there are no overhead lockers available.

There is no additional luggage allowance for children under the age of two years not sitting in their own seat.

Due to limited space onboard our aircraft, bags in excess of 50x40x30 cm may not be accepted.

Heavy luggage (over 10 kilos) is charged per kilo and payable at check-in.

Bergen Airport, Flesland is an international airport located at Flesland in Bergen, a city and municipality in Hordaland county, Norway. Opened in 1955, it is the second-busiest airport in Norway, with 6,078,589 passengers in 2014. Flesland is operated by the state-owned Avinor.

Until 1999 Flesland Air Station of the Norwegian Air Force was co-located at the airport.Airlines that fly from and to Bergen Airport include British Airways,Vueling, Scandinavian Airlines. 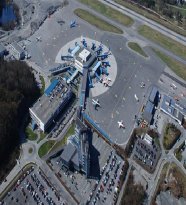