Make a Uganda Airlines Booking and Find Some Amazing Deals

Uganda Airlines is the flag carrier that was founded in 2018. This Ugandan Airline is based at Entebbe / Kampala International Airport (EBB)and flies to several destinations across East Africa.

The airline was founded in 2018 as a revival of the old Uganda Airlines, which flew between 1976–2001. It launched flights in August 2019 with a flight from Entebbe to Jomo Kenyatta International and rolled out other flights to build its route network shortly after.

Once it's built and opened, Uganda Airlines plans fly a number of new routes out of Hoima International Airport. Although not official, the airline is looking to fly to both regional and international destinations.

In Economy Class, passengers are entitled to one item of free carry-on baggage with a maximum weight of 7 kg.

Passengers in Economy class are entitled to two items of free checked baggage with a maximum weight of 23 kg per bag.

In Business Class, passengers are entitled to two items free checked baggage with a maximum weight of 30 kg per bag.

Passengers can enjoy a range of food and drink once in-flight, with complimentary bar service.

While Uganda Airlines doesn't have a separate section of the cabin for Premium Economy, there are seats within the Economy Class cabin that offer extra legroom. These seats are called Economy Space seats. Although the seats are larger, the service remains the same.

Business Class is Uganda Airlines' best level of cabin class. The Business Class experience has a range of benefits from the moment that you arrive at the airport to when you land.

Passengers are given priority boarding, access to the business class lounges on all flights and an additional piece of carry-on baggage.

On flights from Entebbe, passengers will be escorted through the check-in process, airport and boarding process by a personal porter.

Once in-flight, passengers can enjoy food and drink served on china plates, real cutlery and drinks served in glasses.

Business Class seats are situated at the front of main cabin and are set out in a 1 x 2 formation, giving extra legroom to each passenger.

In-flight Wifi is unavailable however there is free Wifi at Entebbe airport.

Passengers that choose to check-in at the airport can do so by visiting the Uganda Airlines check-in desk at the airport of departure. The airline recommends that passengers arrive at the airport at least three hours before scheduled flight departure time if checking-in online. This will allow time for check-in, baggage drop and to pass through security.

The airline operated regional services out of its Ugandan base initially using CRJ-900s, however, within its first year of flying, Uganda Airlines upgraded its fleet with orders of Airbus A330-800neo, as well as keeping its current CRJ-900s. The Airbus A330-800neo, will be used in its future plans to fly to long-haul international destinations.

Entebbe International Airport (EBB) is an international airport in Uganda. It is located close to Lake Victoria, in Entebbe, Uganda. This airport was built in 1951 and is the main airport for international traffic. In 2015, the airport announced expansion and modernisation plans for the airport to begin in 2015, lasting until 2035. The expansion will consist of three phases, including expanding the existing cargo terminal, building a new passenger terminal and strengthening the existing runways.

The airport is currently the hub for Eagle Air, but also operates services for a number of airlines such as flydubai, KLM, South African Airways, EgyptAir, Auric Air, Air Tanzania and also a large number or cargo airlines. 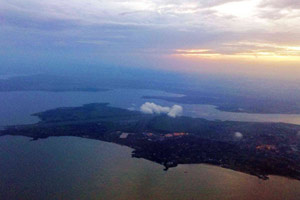 Please click on the logos below to find out more about airlines that fly similar routes to Uganda Airlines: