Cronos Airlines is a regional carrier based in Malabo, Equatorial Guinea. Their hub is Malabo International Airport and it operates services domestically, as well as flights to Cameroon, Benin and Nigeria.

Cronos Air was founded by Andreas Kaïafas in 2007 and commenced operations in 2008.

At first, the airline only had a 19 seat capacity aircraft and a probationary licence of 6 months. By 2009, the airline had a 30-seater, and in 2010 bought a 92-seater aircraft, the BA-146, which previously operated in Germany with Eurowings.

Central African CFA franc, Euros, and US Dollars are just a few of the 169+ currencies that you can choose from when you book flights through Alternative Airlines.

Cronos Airlines are yet to offer online check-in for their flights.

Passengers must check in for their Cronos Air Flights at the airport.

For domestic flights, the check-in counters will open 2 hours prior to departure and close 30 minutes before scheduled departure time.

For international or regional flights, the check-in counters will open 3 hours prior to departure and close 60 minutes before scheduled departure time.

The airline offers two class fares. The less-costly of the two is Economy Class.

Magazines are available as in-flight entertainment. There are snacks and drinks available on select flights.

Passenger can enjoy comfortable seating, with back-seat tables to support laptops. Economy Class seats are set out in a 2 x 2 formation.

Available on short-haul and medium-haul flights, the Business class service offers an excellent service in a serene and luxurious cabin.

Business Class passengers are treated to an excellent catering service with food and drink available to order from the airline's Business Class menu.

Passengers are given a selection of reading material to read during the flight, including the latest edition of the airline's in-flight magazine.

Business Class seats are set out in a 1 x 1 formation, each with padded headrests and cushions.

Please click on the logos below to find out more about airlines that fly similar routes to Cronos Airlines: 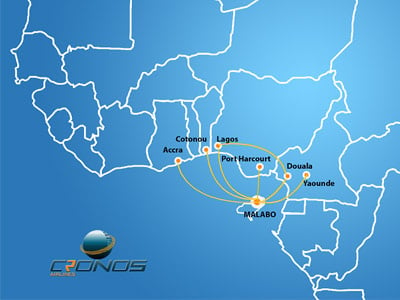 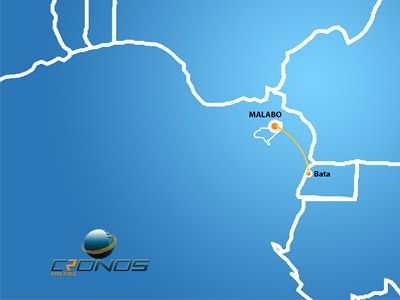 Malabo Airport, often known as Saint Isabel Airport, is an airport located on the island of Bioko Island in Equatorial Guinea. It is located about 9km from the capital, Malabo.

It is the hub airport for Cronos Airlines and also Ceiba Intercontinental Airlines and Guinea Equatorial Airlines. It also serves as a destination for airlines such as Lufthansa, Royal Air Maoc, Karinou Airlines, Fly4Africa and Air France.