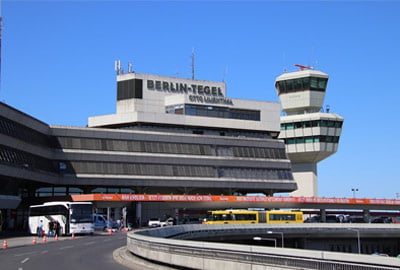 Berlin Tegel Airport is the main international airport serving Berlin, Germany. The airport facilitates a mix of domestic flights within Germany and international flights from countries around the world.

The airport is a primary hub for Sundair and is a secondary hub for easyJet, Eurowings and Ryanair.

Berlin Tegel Airport opened for commercial flights in the 1950s. Since then, it has undergone several renovations and expansions, with the most notable being its famous hexagon-shaped terminal building which was built in the 1960s.

What is the airport code for Berling Tegel Airport?

The airport code for Berlin Tegel Airport is TXL.

Berlin Tegel Airport is located in Tegel, Reinckendorf, which is northwest of Berlin centre. It's around a 20–50-minute drive from Berlin Centre to the airport.

Did you know that you can buy lounge passes for Berlin Tegel Airport with Alternative Airlines? You can purchase them for Berlin Airportclub Lounge and C-Lounge. 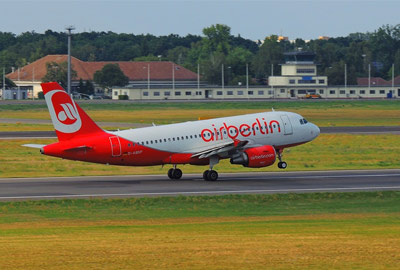 Runway 08L/26R (3,023 m in length) is the airport's bigger runway. The runway is mainly used for long-haul flights that are operated by wide-body aircraft.

Runway 08R/26L (2,428 m) is the smaller runway of the two. This runway is designed to handle flights operated by narrow-body aircraft.

Berlin Tegel Airport has one main terminal building, which is split into five separate boarding areas that are officially named terminals. Each terminal is lettered A–E.

Terminal A (directly connected to Terminal B) has the airport's iconic hexagon-shaped structure. The terminal facilitates flights from most major airlines that fly to Berlin Tegel, including transcontinental flights from carriers such as United and Lufthansa.

Terminal B is directly connected to Terminal A. The terminal handles flights from a mix of airlines, including long-haul flights from Qatar Airways.

Terminal C opened in May 2007 and was created as a temporary terminal due to a high number of passengers using Berlin Tegel Airport. Terminal C was primarily used by Air Berlin while it was active. Today, Terminal C is a transit zone for passengers that have flown on connecting flights.

Terminal D opened in 2001. The terminal is mainly used for small aircraft that fly shorter routes.

Terminal E is situated on the lower level of Terminal D and has just two gates.

Sundair uses Berlin Tegel as a primary hub and easyJet, Eurowings and Ryanair use the airport as a secondary hub.

Here's a full list of airlines that use Berlin Tegel Airport.

How to get to Berlin Tegel Airport

Rental car facilities are located inside the parking area P2.

There are no public transport options to Berlin Tegel. However, you can get the express Bus X9, which runs between the airport and Zoo Station every 10–20 minutes. Zoo Station has links to most places in Berlin through the S-Bahn and U-Bahn railway network.

Taxis to the airport from the city will cost between €25–40 EUR. You can order by phone, online or by getting the person(s) in charge of your accommodation to order one for you.

There are also a number of taxi apps that you can use in Berlin, including myTaxi and Uber.