SmartLynx Airlines started out under the name LatCharter, the airline ran from 1992—2006 independently, until it was bought out by Icelandic Air. In 2008, SmartLynx rebranded, abandoning the LaCharter name and all related logos. In 2012, SmartLynx was bought from Icelandic Air from executives within the company and has since gone back to operating as an independent carrier.

Passengers flying with SmartLynx Airlines are allowed one item of carry-on baggage per person. The bag must not exceed the dimensions of 56 cm x 45 cm x 25 cm. The weight allowance of your carry-on bag will depend on the route that you're flying

SmartLynx Airlines allow for infants (2 years or under) to bring a foldable pushchair on the flight with them.

Check-In at the airport must be completed at least 45 minutes before flight departure time. Please allow an extra 15 minutes if you're carrying special baggage or require assistance. SmartLynx gates close 30 minutes before the flight, so please leave ample time to check-in and pass through security.

SmartLynx Airlines fleet consists of a family of Airbus, including a mix of Airbus A320 and Airbus A321-200s. 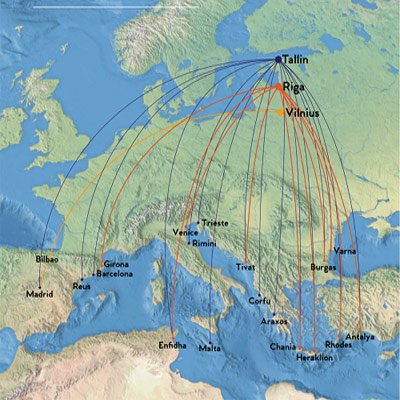 Riga International Airport is also the hub airport for airBaltic and Wizz Air.

SmartLynx Airlines has reported that it carried 2.5 million passengers last year, along with other statistics that show the airlines growth. The company also reported that its net turnover increased 21% year-on-year, bringing in a total of €131.5 million.

Zygimantas Surintas, CEO of SmartLynx Airlines attributed the companies growth to the number of additional aircraft that the airline has added to its fleet. With the new aircraft, SmartLynx has been able to offer passengers a considerable amount of more options, increasing the frequency in which it flies its existing routes, as well as adding some additional routes too. In the future, SmartLynx looks to tackle North America, eyeing potential services flying from Canada to Latin American countries and the Caribbean.