One Way Flights to New York

One Way Flights to New York

Why Fly One Way to New York

New York, described as the "city that never sleeps", is a city where there is always something to do - you definitely won't be able to experience all that New York has to offer in just a one or two-week trip. It's a hub for all things to do with art, culture, diversity and food; it's safe to say there is something for everyone in New York. The best times to visit New York are April to June and November to December - it doesn't get too hot or too cold and is enjoyable all year round.

John F. Kennedy International Airport commonly referred to as JFK, is the primary international airport serving New York City. Over 90 airlines operate from this airport including American Airlines and Delta Air Lines, both of which operate an extensive network of international and domestic flights to/within the US.

Newark Liberty International Airport is an international airport based in New Jersey and is the second-busiest airport in the New York airport system. It's currently a hub for United Airlines - a major US carrier that operates flights both internationally and domestically in the US.

How to Book One Way Flights to New York

It's really easy to book one-way flights to New York when you book through Alternative Airlines! Our step-by-step guide below will show you how to book your one-way tickets to New York from any departure airport that suits you!

Firstly, find our search form at the top of the page and select the 'one-way' button if you're planning to book a one-way flight with no return date. Fill in your departure and arrival airports - in this example, we'll be flying one-way to New York-JFK. You'll also need to fill in how many passengers will be flying and the cabin class you'd prefer to fly in. Hit the 'Search Flights' button to proceed! 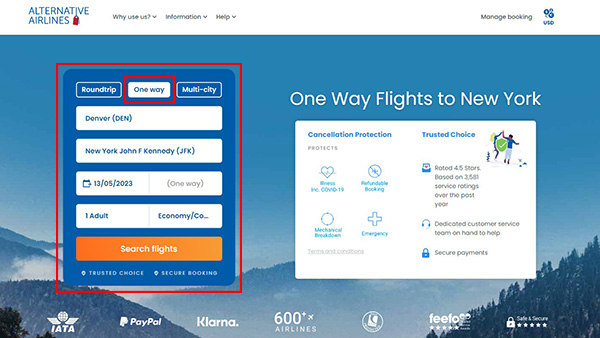 After the search results have loaded, you'll see all of the available one-way routes to New York from your chosen departure city. If you have a particular airline in mind that you'd prefer to fly with, you can use the 'Airline' filter (e.g., select United Airlines to show all one-way flights to New York operated by United). Other filters are available too such as picking the time you want to depart/arrive and the currency you want to use. 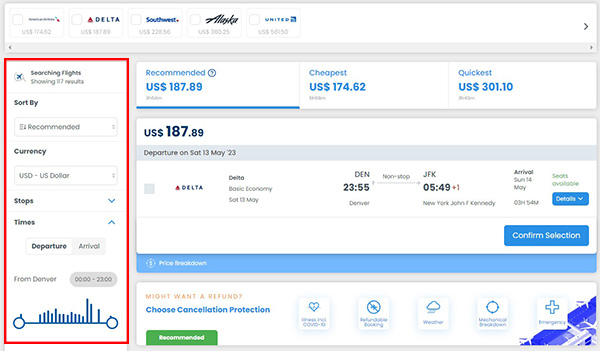 Once you've found the most suitable flight for you, hit the 'Confirm Selection' button to proceed to payment. You can secure your one-way flight to New York by using many different ways to pay that we offer on our site. These include Buy Now Pay Later plans (such as Klarna and Afterpay), cryptocurrencies (such as Bitcoin and Ethereum) and virtual wallets (such as Apple Pay and Cash App Pay). 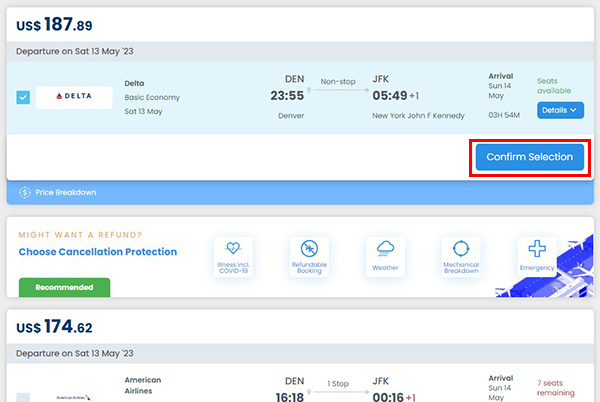 Flying on a one-way ticket to New York is incredibly popular in many major cities across the globe, including London and Paris. Listed below are the busiest routes that airlines operate when flying one way to New York-JFK.

At Alternative Airlines, we have over 650 airlines for you to choose from when you book your flights through our site. The airlines listed below operate frequent one-way flights to New York-JFK.

Why Book One Way Flights

There are many reasons why travellers book one-way tickets instead of round-trip tickets:

To save money, many travellers book two separate one-way tickets instead of a return ticket as these tend to be cheaper. Round-trip flights can often be expensive depending on the airline you're flying with and the destinations you're flying to.

One-way tickets are perfect for those looking to permanently relocate to another city or country. Moving abroad can be stressful and you might not know whether you need to return back to your original departure city or not to tie up any loose ends. Return tickets are very restrictive in this context whereas with one-way flights you can fly back on any day of your choice, especially if it's a last-minute booking!

Where can I book one-way flights to New York?

For peace of mind, you can add security to your booking with our Cancellation Protection and Lost Baggage Insurance service, only when you book through Alternative Airlines!

Can I book one-way flights to New York and pay later?

Of course! When you search for one-way flights to New York with Alternative Airlines, you can spread the cost of your ticket over time when paying with one of the many flexible pay-later methods we offer at checkout. Some of the most popular plans we offer include Afterpay, Klarna, Affirm and Laybuy, among several others. These plans let you split the cost of your ticket up into instalments that can be paid back over a weekly, bi-weekly or monthly basis (depending on the plan you've chosen).

One-way tickets to ANY destination can be both cheap or expensive, but it mostly depends on the airline you choose to fly with. If you're aiming to book cheap one-way flights to New York, we suggest flying with low-cost airlines such as JetBlue, Spirit Airlines, Allegiant Air, Sun Country Airlines, Eurowings and Volaris. One-way tickets are often expensive if you're flying a route to New York that isn't regularly operated (e.g. from Auckland or Lomé. Booking two separate one-way flight bookings can sometimes be cheaper than booking a single return ticket.

What is the difference between one-way and round-trip flights?

One-way flights let you fly from one destination to another without a return flight being booked. A round-trip flight, also known as a return flight, is when you fly from one destination to another and return back to your original departure city at a later date (e.g., flying from Mexico City to New York and flying back from New York to Mexico City a week later).

Do I need a visa for one-way flights to New York?

This depends entirely on where you're travelling from and how long you plan to stay in New York, USA. Travel visas are official documents that let a foreign traveller visit and stay in a particular country for a set amount of time. Foreign travellers from certain countries can stay in the USA for tourism or business without a travel visa for up to 90 days thanks to the Visa Waiver Program.

Please read our guide on travel visas if you are looking to relocate to New York or stay for a long period of time. We also recommend carrying out your own research on visa requirements that you'll need to follow.