Tips for Flying with a Drone

Whether it’s to capture a stunning landscape or to get some amazing images of your family, taking a drone with you when you travel might be a great idea. However, there are lots of limitations to consider. Our guide will help you gain some peace of mind.

Are you allowed to take a drone on a plane?

This will depend on the airline and the country to which you are travelling. It is recommended that you check with the airline and with the local Civil Aviation Authority (or equivalent) of your destination before you decide to take your drone with you when you fly.

Where to pack your drone - carry on or checked baggage?

It is recommended by many that passengers wishing to take a drone with them should pack them and the support equipment in carry on baggage, rather than checked baggage. This is due to the fact that airlines do not typically offer compensation if a drone is in misplaced, lost, stolen, or damaged luggage. It is always recommended that you check with the airline before you travel so that you can prepare your drone and ensure that it is packed correctly.

It can be difficult to travel with batteries, so it is important to ensure that if you choose to travel with a drone that has a battery, you keep to specific airline and country specific rules to avoid having your equipment confiscated. 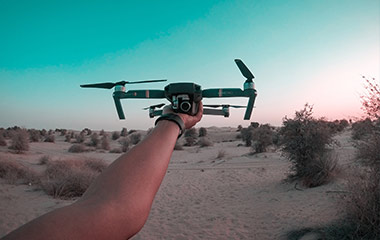 Passengers flying with Southwest Airlines can travel internationally with a drone, however, it must meet certain requirements, particularly with regards to battery size. Travelers are permitted to have a maximum of 20 spare lithium-ion batteries at one time. Spare or loose batteries are to be transported only in carry on baggage.

As of writing, the Delta Airlines policy on drones is not as clear as some other airlines, however, the Delta battery policy and the TSA drone recommendations apply to this.

Despite there being no clear guidelines on drone carrying for Delta Airlines, it is recommended that travelers wishing to fly with a drone submit an email to Delta’s Dangerous Goods Department, at least 10 days before flying.

The Alaska Airlines policy for flying with drones is that drones without batteries can be checked as baggage, however, batteries for the drone must be in the passengers carry on baggage. All batteries must be under 100-watt-hours with terminals covered to prevent short-circuiting, and it is not recommended that passengers travel with fully charged batteries.

American Airlines passengers are allowed to travel with drones. However, the drone’s battery must not exceed 160-watt-hours. Passengers may take a drone as carry on luggage if it or its box is less than 22 x 14 x 9 inches / 56 x 36 x 23 centimeters in size.

Passengers flying with JetBlue can take drones with them in both checked and carry on luggage. If passengers choose to travel with a drone as carry on, it must fit underneath their seat, or in the overhead bin, with the battery fully installed, and remain switched off for the entire duration of the flight.

With regards to batteries, passengers can take up to 2 spare lithium-ion batteries between 100 and 160-watt-hours as carry on items, as long as they are within the terminal protected with tape, or stored within a plastic bag. There are currently no restrictions in place for drone batteries under 100-watt-hours. 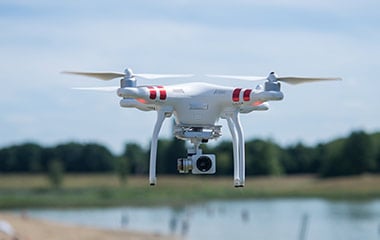 Drone usage is banned in Nicaragua unless you have a permit. You are putting yourself and your drone at risk if you take it with you to Nicaragua, and the staff at customs are well within their rights to confiscate your drone.

Private use of drones is not permitted in Morocco, and companies can only use drones in Morocco with a special permit. Travelers who are caught with a drone in Morocco will have it confiscated and will be subject to a fine. It is recommended that unless you have a special permit, you should not take a drone to Morocco.

Fiji has very strict rules with regards to drone usage. Those wishing to fly a drone in Fiji, whether privately or commercially, need to apply to the CAAF (Civil Aviation Authority of Fiji) to be able to use a drone in the country.

In order to fly a drone in Zambia, travellers need to have the following documentation: RPAS Letter of Approval (RLA) Certificate of Registration RPAS Pilot’s License (RPL) All of the above documentation can be acquired from the Zambia Civil Aviation Authority Alongside licensing, Zambia has very strict rules with regards to the altitude, distance and weight of drones.

The import of drones to Cuba is not allowed. Passengers who attempt to bring a drone into Cuba will have the drone confiscated, and will only have it returned on leaving the company if a large fine is paid.

Drones are seen as a serious risk to public security in Saudi Arabia, so are generally prohibited from use. Some commercial users are allowed to operate with permission from the authorities, however, the application process for this is very strict.

The operation of drones is prohibited in Egypt, under the Egyptian Aviation Act (Article 46, sentence 8).

In Kenya, drone usage is banned unless permission has been obtained from the Department of Defense and the Kenya Civil Aviation Authority (KCAA).

For a number of years the usage of drones was banned in India. However, recently, a law passed to repeal the ban. There are still complex rules for drone usage; for example, foreigners are not allowed to fly drones in India. If a drone is detected at the airport without prior permission from the Indian Ministry of Communications, it will be confiscated and will not be returned. 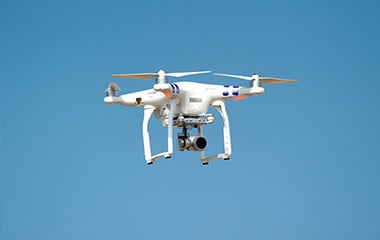