What is a domestic flight? 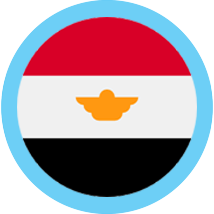 As domestic flights mean you don't leave the country, you won't be subject to border and immigration controls. Also, carrying a passport may not be required. However, you will still need a valid photo ID, so many people choose to use their passport anyway. Those residing in Egypt or have a reference with Egypt from outside of the country can use the Egyptian Identification card instead of using a passport to travel within the country.

Why book domestic flights in Egypt?

Egypt is well known for its ancient civilization and some of the world's most famous architecture, including the Giza pyramids, the Great Sphinx and the ancient temples of Luxor dating back thousands of years. Whichever city you fly to you're bound to discover ancient history. Egypt has the largest Arabic population in the world with a population of nearly 100 million.

Egypt is also a large country, measuring more than 390,121 sq mi. Domestic flights are a great way of getting around the large country. Many travellers choose to fly domestically within Egypt as it saves time and air travel is much faster. Egypt's flag carrier is EgyptAir which many passengers choose to fly on with however many passengers also fly with other airlines as well as low-cost airlines such as the ones listed below.

The airlines below are Egypt's airlines which operate domestic flights within the country:

Do I need to carry a passport for domestic flights in Egypt?

Depending on the airline you're travelling with. Some form of ID or Egyptian National ID card is enough to travel with Egypt. It's always important to find out, so either contact us or the airline itself to check the airline's policy.

What is the baggage allowance on Egypt domestic flights?

What time do I need to check-in at the airport for domestic flights in Egypt?

Check-in times will depend on the airline you are flying with an airport you are flying from. The check-in time for domestic flights is often a little later than it is for international flights as passengers normally require less time to get through the immigration and border controls at the airport.

Can I purchase domestic flights in Egypt online?

Certainly, you can purchase domestic flights in Egypt online with Alternative Airlines. You can use our search bar at the top of the page to look for flights between your two chosen Egyptian locations and then simply click to search for the flights. Once you've searched for the flights, you'll then be shown all available flights from different airlines which you can then choose the suitable airline for you!