SereneAir (سیرین ایئر‎), often referred to as Serene Air or Serene Airlines, is a privately-owned airline from Pakistan. It launched operations in January 2017. Serene Air was granted a licence in March 2016, permitting the establishment of the airline. The airline received its first aircraft, a Boeing 737-800, in November 2016. One week after obtaining its air operator's certificate (AOC) in January 2017, SereneAir launched its inaugural flight from Islamabad to Karachi.

It is one of four domestic carriers in Pakistan, after Pakistan International Airlines, airblue, and Shaheen Air. SereneAir also flies to a selection of international cities within the Middle East, including Riyadh and Dubai.

Top Tip: Find out more information in our guide to domestic flights within Pakistan.

There are also several international destinations that SereneAir flies to, including Jeddah, Riyadh, Sharjah, Dubai and Chengdu. 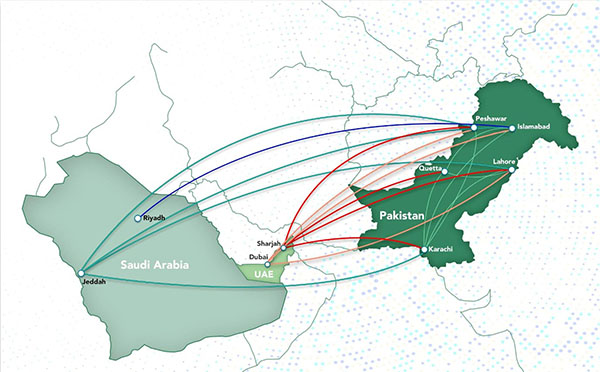 SereneAir airlines ask passengers to check in for flights at the airport. The check-in desk will open 2.5 hours before the scheduled departure time. This will close 45 minutes before departure.

SereneAir aircraft are fitted with Boeing's Sky Interior which gives the aircraft LED mood lighting and a spacious look.

SereneAir's expertly trained cabin crew give passengers a high-level of service. Passengers have the option to order from SereneAir's inflight menu, which includes hot meals, as well as cold snacks and a varied drinks menu. SereneAir offers a different inflight menu every day, so regular passengers will never get bored with the available options.

SereneAir seats give lots of room and are comfortable. The seats are specifically designed to give extra legroom.

SereneAir seats are set out in a 3 x 3 formation on every flight.

SereneAir offers meals in-flight. They offer a different selection of meals and menus every day.

Each passenger, whether flying economy class or business class, receives a full meal on board.

It is the base for SereneAir, but also a hub for other airlines such as Pakistan International Airlines, AirBlue and Vision Air International. There are 2 airports with 3 terminals.

Please click on the logos below to find out more about airlines that fly similar routes to SereneAir: