Make a Khabarovsk Airlines Booking and Find Some Amazing Deals

Khabarovsk Airlines, known also as KhabAvia in Russian, is a state owned Russian airline. It was founded in 2004 by the Khabarovsk Krai government and currently run flight services to destinations in Khabarovsk. The operate passenger services, charter flights and cargo transportation services.

Passengers are permitted one small personal item in addition to the checked baggage allowance. This can be items such as a handbag, briefcase, umbrella, reading material for a flight, camera, laptop or a coat.

Passengers are permitted the following checked baggage, which is dependent on the type of aircraft travelling in:

Khabarovsk Airlines do not currently offer online check-in for their flights.

Passengers must check in at the airport for their flights. The check-in times will be stated on the ticket, but make sure that you arrive at the airport within enough time to ensure you have enough time to check-in, check luggage and pass through security. Please note that the check-in desk will close 40minutes prior to departure, unless otherwise stated.

Please click on the logos below to find out more about airlines that fly similar routes to Khabarovsk Airlines:

Khabarovsk Novy Airport is an International airport based in Khabarovsk, Russia. It was first constructed in 1938 the old terminal from was demolished and reconstructed in 2016 which is planned to be finished in 2019.

The airline is also the airport hub for Aurora, S7 Airlines, Vostok Aviation Company and of course Khabarovsk Airlines. 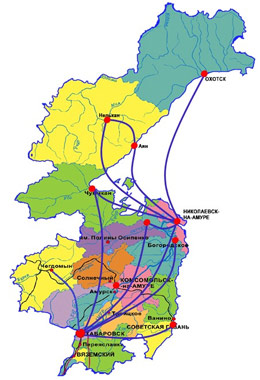