Make a RusLine Booking and Find Some Amazing Deals

The airline fleet consists of a mix of Bombardier CRJ100 and 200, and Antonov aircraft.

RusLine passengers are entitled to one item of carry-on baggage — with a maximum weight of 5kg — on all fare groups and classes.

Dimensions of hand luggage shall not exceed the following limits: 55x40x20cm - not more than 115 cm in the sum of three dimensions.

RusLine passengers flying on the Special and LIGHT fare group are not entitled to any free checked baggage. However, checked baggage is available to purchase.

RusLine passengers flying on the CLASSIC and OPTIMUM fare class are entitled to two items of checked baggage with a maximum weight of 23kg.

RusLine passengers flying on the PREMIUM fare group are entitled to one piece of checked baggage with a maximum weight of 32kg.

The sum of three dimensions of a single piece must not exceed 203 cm. 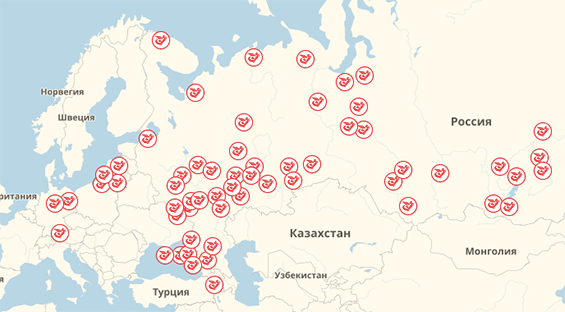 RusLine to move to Vnukovo from Domodedovo

Russian regional carrier RusLine has announced its decision to relocate its Moscow base from Domodedovo to Vnukovo starting on March 21. The move was initiated by the board of directors as part of the airline’s long-term network development strategy, which is aimed at boosting point-to-point and transit traffic, as well as an attempt to avoid direct competition from much bigger S7 group.

“Since we a not the only airline flying to Domodedovo from most destinations in our route network, the move to Vnukovo will provide out existing and future passengers with a more convenient choice of airport,” CEO Dmitry Mirgorodsky commented. He pointed out that Vnukovo is easily accessible from Moscow and has no entrance queues at the terminals. Another important factor for the airline is that its maintenance base RusLine Technics, which is certified by the Russian, European, and Bermudan authorities, is stationed at Vnukovo.

The airline is transferring all of its 11 scheduled domestic flights (to Belgorod, Elista, Ivanovo, Izhevsk, Kirov, Kursk, Lipetsk, Penza, Tambov, Ulyanovsk, and Voronezh) and one international flight (to Leipzig) to Vnukovo.

The current decision is in fact a revision of the carrier’s 2010 relocation from Vnukovo to Dmodedovo. From mid-November 2017 to March 23 this year, RusLine also operated flights from Moscow’s third airport, Sheremetyevo, to three new destinations in its network: Kirov, Lipetsk, and Penza.

According to Russia’s Federal Air Transport Agency, RusLine currently operates a fleet of 17 Bombardier CRJ100/200 regional jets and a single Bombardier Challenger 850. Last year it served 606,900 passengers, up 4.6% on 2016. In January this year the airline demonstrated a 16% year-on-year traffic growth with 34,100 passengers. The carrier’s business model is focused around building a network of routes connecting Russia’s regional centers and major hubs.