Make an Air Djibouti Booking and Find Some Amazing Deals

Air Djibouti, also known as Red Sea Airlines, is the flag carrier of Djibouti. The airline was first launched in 1963 but ceased operations in 2002. In 2015, Air Djibouti relaunched itself, at first only serving cargo. Since 2016 it has served passengers as well. The airline's headquarters are in the country's capital, Djibouti city.

Since the relaunch, Air Djibouti has been chaired by Aboubkar Omar Hadi and its CEO has been Mario Fulgoni. The company was supported by Cardiff Aviation, a UK-based company in South Wales. In late 2015 Air Djibouti relaunched service with a Boeing 737 freighter air craft. The government wishes to establish the country as a regional logistics and commercial hub for trade in East Africa. The relaunch of Air Djibouti occurred as part of this plan. In November 2017, Air Djibouti's contract with Cardiff Aviation ended. Ethiopian Airlines has expressed interest in a possible partnership.

• Executive class: 1 item up to 10kg with maximum dimensions of 55 x 25 x 35 cms plus an additional smaller item which does not exceed 8kgs.

NOTE: there may be some flexibility, depending on the equipment of the aircraft and/or the restrictions imposed by governmental regulation.

• Executive class: up to 2 pieces, each one not weighing more than 32kgs and the dimensions cannot exceed 158 cms (height + length + width).

The cabin crew will be available throughout the flight. A high quality snack or meal will be served along with a selection of drinks and hot beverages.

A choice of plated meals or snacks will be offered, served on bone china, by the dedicated Business Class crew.

Business passengers can make the most of premium lounges. This includes a complimentary hot meal/beverage, wi-fi, and a quiet and relaxed environment.

There is a separate cabin, with comfortable reclining seats, and no middle seat.

Air Djibouti is based at Djibouti–Ambouli International Airport, which is both a military and civilian airport and was opened in 1948. The airport is located approximately 6 kilometres from the city centre of Djibouti and is situated in the town of Ambouli. The airport includes a V.I.P terminal for prime ministers and presidents. Originally modest-sized, the facility grew in the post-independence period after numerous successive renovation projects.

Djibouti–Ambouli International Airport has a single terminal building, with one departure gate. As the airport is located south of Djibouti City and its runways run east and west, an airliner's landing approach is usually directly over the conurbation of the capital, when the wind is from the west. 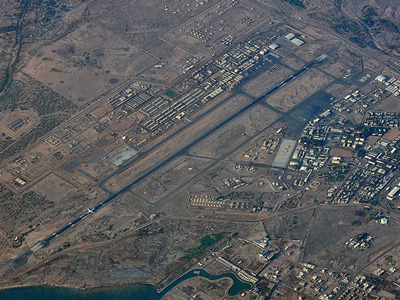 The airline started regional services with the Boeing 737-400 on 16 August 2016 and planned to introduce two new aircraft before the end of 2016.