Unfortunately, this airline stopped flying operations in 2015. Please click on the logos below to view alternative airlines who fly similar routes:

Air Bagan is an airline based in Yangon, Myanmar and operates domestic scheduled services within Myanmar and Thailand. The airline's hub airports are Yangon International Airport and Mandalay Chanmyathazi Airport.

Air Bagan is listed as a Specially Designated National by the United States Department of the Treasury for its association with the Government of Myanmar, meaning U.S. citizens are generally prohibited from dealing with the airline by U.S. sanctions against the government of Myanmar.

Air Bagan is listed as a Specially Designated National by the United States Department of the Treasury for its association with the Government of Myanmar, meaning U.S. citizens are generally prohibited from dealing with the airline by U.S. sanctions against the government of Myanmar.

Air Bagan had a scheduled daily Yangon-Nyaung U-Mandalay-Heho-Yangon flight, as well as flights to other destinations inside Myanmar including Kalay, Myitkyina, Kengtung, Bhamo and Tachileik during the week. Air Bagan is not the only domestic airline that has recently suspended operations.

Air Mandalay suspended flights last December, though returned to the air in May 2015. Air Bagan, the very first private airline in Myanmar 100% owned by Myanmar national, was established in 2004. At present, Air Bagan is operating 19 domestic destinations and a regional charter flight to Chiang Mai with (One) ATR-42 and (Three) ATR-72.

Air Bagan is set to benefit as Yunnan's Myanmar borderlands becoming more accessible. Until the land border with China opens for foreigners, one of the only ways to get into this fascinating area is to enter from northern Thailand. It is also possible to take the overland route from Jinghong to Laos, Laos to Thailand and Thailand on into Myanmar.

The view into Myanmar at the Thai border town of Mae Sai is as far as most tourists go. However, new regulations mean it is now easier to enter into Myanamar's Kengtung State, either for excursions exclusively in the region, or as part of a larger trip throughout Myanmar.

Yangon International Airport is the largest airport of Myanmar and is the hub airport for Air Bagan, Air Mandalay, Asian Wings Airways, Myanmar National Airlines and Yangon Airways. It has one runaway and can handle nearly 5 million passengers every year.

Other airlines which fly to and from this airport includes AirAsia, Air Bagan, Air India, All Nippon Airways, Asiana Airlines, Vietjet and Tigerair. 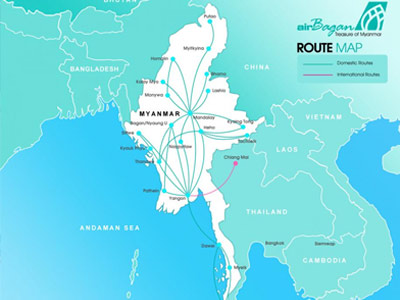 Air Bagan announced it had suspended its flights, with an eye to returning to the skies later this year

The airline has faced a number of recent hurdles, and it had temporarily suspended flights from August 16 due to a maintenance check and restructuring plan. In the meantime, Air Bagan’s code-share flights operated by Asian Wings Airways remain in operation. The airline was down to two operational ATR-72 aircraft, though one of the two was damaged when it skid off of the runway at Yangon International Airport on the evening of July 24.

The Myamnar domestic carrier suspended flights in mid-August after its then sole active aircraft, ATR72-500 XY-AIK (cn 592), was involved in a landing incident at Yangon. While it has not operated its own flights since then, it has remained active through codeshare flights with partner Asian Wings Airways (YJ, Yangon). Founded in 2004, Air Bagan operates flights throughout Myanmar as well as to Chiang Mai in Thailand. Aside from the ATR72, its fleet also includes two ATR42-300s.