The airline launched in 2017, operating as a charter-only airline. However, in mid-2018, the airline announced its intentions to fly scheduled passenger service from Juan Santamaría International. Upon the announcement, Skyway CR named Puerto Jimenez and Drake Bay as two focus destinations. Shortly after the announcement to operate scheduled passenger services, Skyway Costa Rica took in two Let L-410UVP-E20 aircraft, which were brought in specifically to operate the new routes.

In October 2018, SkyWay Costa Rica flew its first commercial passenger service, with a flight to Puerto Jiménez. In the same month, it launched services to Drake Bay, Quepos, Arenal and Liberia/Tamarindo and its first international service to Bocas del Toro, Panama. Today, Skyway CR continues to add more destinations to its route network as its plans to cover Costa Rica and the surrounding region develops.

Skyway Costa Rica's fleet is made up of two 19 passengers LET L410 UVP E20 aircraft. This particular aircraft was designed to be able to operate in the unique climates in Costa Rica. The LET L410 UVP E20 aircraft were brought in after Skyway CR announced its intentions to operate passenger services in mid-2018. Each aircraft is equipped with comfortable seating, substantial legroom and windows on each side of every row.

Skyway Costa Rica allows one small item of carry-on baggage per person. This baggage must not exceed 4.5kg (or 10 pounds) in weight.

SkyWay Costa Rica allows passengers to check one item of checked baggage per person. This baggage must not exceed 18kg (or 40 pounds) in weight.

To check-in for their Skyway Costa Rica flights, passengers must present the relevant travel documents to a Skyway CR check-in agent at the airport of departure. 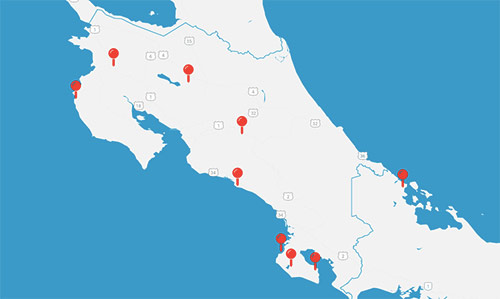 Juan Santamaría International Airport is the main airport in San José, Costa Rica and the hub airport for Skyway Costa Rica. The airport was opened in 1958, under the name 'Aeropuerto Internacional el Coco', but was renamed some years later.

The airport is split into two separate terminals — the 'Main Terminal' and the 'Domestic Terminal', which is where Skyway CR operates the majority of its flights from.

Click on the logos below to explore alternative airlines that fly similar routes:

Alternative Airlines is delighted to announce that we can now sell Skyway Costa Rica flights through our website. After announcing it will operate scheduled passenger services earlier this year, Skyway Costa Rica is set to become one of the major players in the Costa Rican aviation industry and we're very excited to be able to offer passengers the opportunity to fly with them.

To search for Skyway Costa Rica flights, enter the route you wish to fly and use the search bar at the top of the page.