Okay Airways (Chinese: 奥凯航空公司) is China's first private sector airline. The airline is headquartered in Shunyi District, Beijing, People's Republic of China and is based is in is Tianjin Binhai International Airport in Tianjin. Okay Airways began flying operations in June 2004 and operates charter services and flights to expand into scheduled passenger and dedicated cargo services. The year after, in February 2005, Okay Airways received an aviation carrier business license from the Civil Aviation Administration of China (CAAC).

The carrier's first flight from its base in Tianjin to Changsha was on March 11, 2005, with 81 people on board. Okay Airways and Joy Air were announced as launch customers for the Xian MA700 aircraft and are to be involved with the development of the aircraft, which is due to make its start operating in 2017. Okay Airways' fleet consists of Boeing 737-800s and Boeing 737-300s, which serve more than 100 domestic and international routes. Beijing Capital International Airport, first opened in 1958, is located in Shunyi District, about 32 kilometres northeast of downtown Beijing. It is the busiest international airport in China. Since 2010, the airport has had the highest number of passengers come through in Asia. It was the first Civil Aviation Airport in the period of the People's Republic of China.

Originally the airport consisted of one small terminal building, which was mainly used for the charter flights and VIP Passengers. The airport now has 3 terminals. In 2012, the passengers handling capacity reached 73,770,000. The airport became the second busiest airport in the world, behind the Atlanta Airport in the United States. The future looks very bright for Okay Airways as they are positioning themselves as one of the larger airlines in China for years to come. The acquisition of five new 787-9 jets shows how serious Okay is about their growth and entrance into the long-haul market. With an ever-expanding global market, it is exciting to see China pulling for a large piece of the travel market. Okay Airways continues to be on the leading edge in China setting the bar high for other Chinese airlines.

The hand baggage allowance for Okay Airways customers is one item with maximum dimensions of no more than 55cm x 40cm x 20cm.

Before going through airport security, passengers should check the items contained in the carry-on baggage. Any fluid exceeding 100ml must be transferred to their checked baggage. Fluid within 100ml must be placed in a plastic bag for security checks. Other prohibited items must not be carried onboard the aircraft.

No individual items could exceed 32kg or larger than 158cm (62") in the sum of three dimensions.

Online check-in is available from the Okay Airways website. Passengers are advised to check-in online to secure their boarding passes.

Our aim at Alternative Airlines is to make the booking process as straightforward as possible, that's why we offer Okay Airways flights in English. Use our simple and secure booking system to find Okay Airways flights, knowing that you can contact our customer service team with any queries about your flight.

Okay Airways is based at Tianjin Binjai International Airport in the Dongli District of Tianjin. In 2017, the airport received 21 million passengers which makes it one of the busiest airports in China. A wide number of different airlines operate out of the airport including Air Macau, EVA Air, NokScoot, Colorful Guizhou Airlines and Tianjin Airlines. 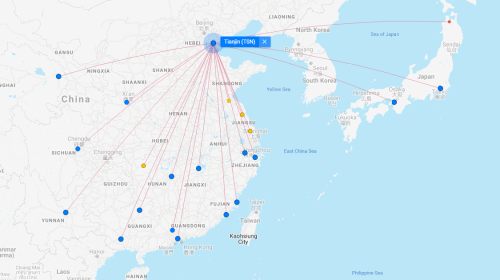 From July 2018 the Chinese airline, Okay Airways, will begin flying a new route between Changsha, the capital of China's Hunan province, and Puerto Princesa in the Philippines. The weekly route will take place on Mondays from July 2018.

When it comes to international travel, Boeing is a manufacturer that has been at the top of the list for decades. Boeing’s new 787-9 is a great representation of the amazing design that takes place when Boeing decides to release a new plane available for airlines to purchase. China’s Okay Airlines has decided to order five new Dreamliners to add to their fleet. This agreement means that Okay Airlines will be paying Boeing $1.4 Billion in order to acquire these new airliners.

Okay Airlines made this purchase in order to further solidify its position in the long-haul market. With the rising competition in the long-haul market with airlines like Korea Air and Qatar Airways, it is important that Okay Airlines have options for their customers that will be both cost-effective and luxurious. Boeing has stated on their website that the 787-9 is designed to dramatically improve the air travel experience. A flourishing first class will give travelers the ability to purchase seats that will recline into full beds. Each seat in the entire plane is equipped with a full tv and AC power. With better fuel efficiency, Boeing has stated that the 787 will use 20% less fuel than other jets in the air today. This also lowers their Co2 output, greatly adding to the global effort to create a cleaner environment.

With Bejing’s new international airport set to open in 2019, the timing could not be better for Okay Airlines to be purchasing five new 787-9 jets. It seems as though there are many other airlines around the world that are equally interested in the 787 series from Boeing.

The 787 is a great option for many airlines due to the access this gives them to be profitable on long-haul routes. The 787 also gives passengers the ability to fully enjoy their long-haul flights.

The future looks very bright for Okay Airlines as they are positioning themselves as one of the larger airlines in China for years to come. The acquisition of these five new 787-9 jets shows how serious Okay is about their growth and entrance into the long-haul market. With an ever-expanding global market, it is exciting to see China pulling for a large piece of the travel market. Okay Airlines continues to be on the leading edge in China setting the bar high for other Chinese airlines.

In a press release issued this week, ATSG said it had acquired two B737-400s for conversion into freighters by its PEMCO World Air Services unit. Once completed, the aircraft will be placed on seven-year lease agreements with Okay Airways through ATSG West Leasing Ltd.

The converted aircraft are expected to deliver in late 2017. Okay Airways will operate them in support of its express services for e-commerce and other companies in the domestic China market.