Soekarno-Hatta International Airport is the main airport serving the Jakarta area on the island of Java, Indonesia. The airport operates as a hub for Garuda Indonesia, but also for Batik Air, Cardig Air, Citilink, Express Air, Indonesia AirAsia, Lion Air and Sriwijaya Air. The airport has two runaways and in 2014, handled 62 million passengers becoming the 9th busiest airport in the world. 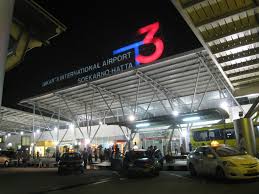 In a country of over 200 million people spread across 17508 islands, you’d expect the market for domestic air travel to be strong and that a robust, efficient airline would thrive, Merpati, the second largest carrier in Indonesia, is that carrier. Merpati Nusantara Airlines There is a lot of competition on the main trunk routes between the largest Indonesian cities, but if you’re looking to travel to one of the secondary destinations within this vast country then Merpati is your best bet. Internationally the airline flies only to Kuala Lumpur, Singapore and Dili (East Timor) but domestically flights operate from either of the country’s two main international access airports at Jakarta or Denpasar. Destinations served include Balikpapan, Banjarmasin, Batam, Biak, Bima, Cangkerang, Cilacap, Halim, Jayapura, Kendari, Kupang. Makassar, Manado, Manokwari, Mataram, Maumere, Merauke, Padang, Palembang, Palu, Pekanbaru, Sorong, Surabaya, Tanjung Karang, Waingapu, Ujunpandang and Yogyakarta. Merpati AirlinesMerpati Flights in Indonesia OK let’s get the joke out of the way before we start - Question: "What song characterises Indonesia’s second largest airline?" Answer " It’s Merpati and I’ll fly if I want to." Seriously Merpati is a significant airline operating to many destinations within the world’s largest Muslim democracy, which encompasses over 300 different ethnic groups and 250 distinct languages. Our advice is always to arrive early and make your presence known to the inevitably friendly (but not always attentive to your needs) Merpati staff. Alternative Airlines the UK site for immediate confirmed on-line bookings. Merpati operates a mixed fleet of Boeings and turboprop aircraft and is updating during 2007 with the first deliveries of an order for 15 Xian MA60’s, a 60 seat Chinese built aircraft. {modulepos relatedsidebar}