Make a Lauda Booking and Find Some Amazing Deals

Lauda, which is legally known as Laudamotion GmbH, is an Austrian airline that operates scheduled passenger services throughout Europe. The airline was founded in 2004 and is based at Vienna International Airport (VIE). Laudamotion has a route network that flies over 60 routes to more than 40 destinations.

Formerly known and founded as Amira air, the airline was founded in 2004 and initially operated as a charter airline flying internationally from Vienna. In 2016, ex FormulaOne World Driver champion, Niki Lauda bought out the company and renamed the airline 'Laudamotion'. After continuing to run charter flights for a short period of time, the airline moved to its current base at Vienna International to begin scheduled passenger flights. In early 2018, Niki, an airline that had associations with Niki Lauda retired its services and as a result, Lauda acquired all of Niki's operations, as well as 15 aircraft.

In August 2018, Ryanair announced the acquisition of 75% of the shareholding for Laudamotion. Shortly thereafter, the airline announced that it had fully taken control of Lauda airlines, making it one of three airlines' wholly owned by Ryanair, along with Ryanair Sun and Ryanair UK.

In 2019, Lauda changed its trading name from 'Laudamotion' to Lauda, which is what it is known as today. Along with this rebrand, Lauda announced that it intends to expand its fleet by three additional aircraft and will add more than 20 routes to its schedule within the year.

The Lauda fleet contains all Airbus A320-200 aircraft. As of August 2019, the airline had 21 of this aircraft in operation, with another 4 on order.

The company has previously stated that their fleet will remain exclusively Airbus, with future expansion plans detailing the purchase of at least 100 Airbus A321neo.

Lauda currently operates scheduled flights mainly around Europe and occasionally to the Middle East. The airline operates flights year-round to many destinations, with some destinations having seasonal-only flights. See the tables below for the full list of destinations that the airline fly to:

All Passengers flying on Lauda are entitled to one item of free carry-on baggage, which is included in the price of their ticket. This small personal item of hand baggage must not exceed the dimensions of 40 x 20 x 25 cm, and must be able to fit in under the seat in front of you. Examples of items such as this include a handbag, laptop bag or small backpack.

Passengers have the option to purchase the 'Priority & 2 Cabin Bags' fare, or a Plus/Flexi/Family ticket, or a connecting flight ticket. If they have selected and paid for one of these options, passengers can bring one of the small personal items detailed above, along with one additional 10kg bag with the maximum dimensions of 55 x 40 x 20cm.

Lauda does not include a checked bag as part of the ticket fare. However, passengers will have the option to buy a 10kg check-in bag. There are no size guidelines for this checked bag.

If passengers turn up at the boarding gate with baggage that exceeds their set amount, size or weight, they will be subject to pay an excess baggage fee as they will need to be placed in the hold of the aircraft.

Passengers can also choose to check-in via the Ryanair mobile app, which can be downloaded for iOS or Android phones. The same check-in deadlines apply for mobile as they do for online check-in, meaning it opens between 60 days to 2 hours before the flight for passengers buying a seat or passengers with Flexi Plus fares, and between 4 days and 2 hours prior to flying for passengers not choosing a seat.

Vienna International Airport is an airport located in Austria's' Capital; Vienna. It was originally built in 1938 where it was used during World War II as a military airport and was later developed to facilitate commercial flights with new airport buildings and runway. It now has 2 runways and 3 terminals. It serves as an airport base for many European LCCs (Low-Cost Carrier) such as easyJet, Austrian Airlines and Wizz Air. 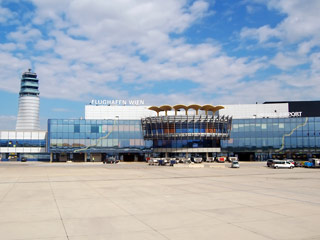 Economy class is the standard class on Laudamotion planes, and makes up the majority of the cabin. In this class, passengers get a comfortable leather seat with enough legroom to be able to relax on the plane. Food, snacks and drinks are available for purchase throughout your flight, should you wish.

The seats in economy have between 30-40 inches of legroom, depending on the location of the seat, for example exit row). The width of the seats between each armrest is 17.

There is currently no business class on Lauda flights.

Lauda do not yet offer passengers a first class fare.

Please click on the logos below to find out more about airlines that fly similar routes to Lauda:

Lauda provides its passengers with entertainment during its flights. Depending on the duration of your flight, this will include shared TV monitors on the cabin ceiling, which will show TV shows and documentaries. These will be in both German and English. Although there will be headphones available to purchase onboard, passengers are welcome to bring their own to plug in to listen to the TV system.

Lauda does not include and onboard food or drink items as part of the flight ticket price. However, there will be items such as snacks, light meals and lunches and drinks available to purchase onboard the plane. On some routes, there will also be hot meals such as lasagne and curries. If you have a dietary requirement, you can get the availability of that for different airlines here.

Passengers are welcome to bring with them their own food and drinks on the plane with them. If you need to check what food you can bring on a plane, please do so here.

There is currently no WiFi available on Lauda flights.

Lauda do not yet offer a frequent flyer program.

Lauda is not part of an airline alliance, but it is a subsidiary of Ryanair Holdings, making it a sister airline to Ryanair, Ryanair UK and Ryanair Sun.

If you need any type of special assistance, you can put a request in when making a booking with Alternative Airlines and we will pass on the information to the airline. Lauda are able to provide airport assistance, postural supports in the cabin, wheelchair assistance and many other services.